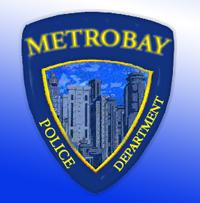 The Metrobay Police Department has been around almost as long as the city itself, and has faced a significant uphill struggle against the forces of evil. Though there are many honest and brave cops in the police force, they have slowly dwindled to the minority, and some crooked cops are on the payroll of a certain Max Indeks and his Circle of R.O.P.E.

After a significant number of female citizens and officers developed superpowers, a subdivision of the police department, the Superheroine Squad, was officially established. Though the Squad and the department often work together, the Squad retains a significant amount of autonomy from the police. The Squad’s leaders, Ms. Metrobay and Alpha Woman, hold the honorary title of police captain and are outranked in department heirarchy only by the Chief of Police and the Mayor of Metrobay.

The police force is known for using the latest in crimefighting technology, and the artifically intelligent computer Sentius was constructed to help assist them in locating and arresting many notorious criminals. Several prominent heroines have spent time on the force including Silver Satin, Brown Sugar, and Blackout, and each full-time Superheroine Squad member is required to go through cadet training at the police academy before officially joining the Squad.

Prominent current and former non-superheroine members of the department include Chief Patrick Coleman, Warden Marcia Smith, Cadet Mick Jones, Officer Daisy Sanchez, and Sgt. Erica Donovan. A fellow officer was featured in Carnal Knowledge as the first victim of Sentius’s cybernization process, but after his early retirement his personnel file was marked ‘classified’ for security reasons.