Andrea Carmichael is one of the most wealthy and powerful women on the planet. Her company, Carmichael Inc., is valued at billions of dollars and has only seen staggering growth under her keen leadership, with employees that know her well and respect her keen business mind.

And yet few would ever believe that their boss was none other than the legendary heroine Azure Avenger.

From an early age, Andrea was able to create and manipulate a powerful force field, either to use for her own defense or to expand and wield as a potent weapon. Sensing the good she could do, she invested her wealth in pursuing a secret career as a crimefighter, journeying the globe to become more powerful and proficient at protecting those not as fortunate as herself.

During her travels, she met the young Gem Angel, Onyx Thunder, and the two forged a very close friendship, one that could even be described as intimate. For a long time, the two were partnered up and fought crime together until, after many years, they had an undisclosed falling out with one another and Andrea returned home to focus on guiding her company towards further success. 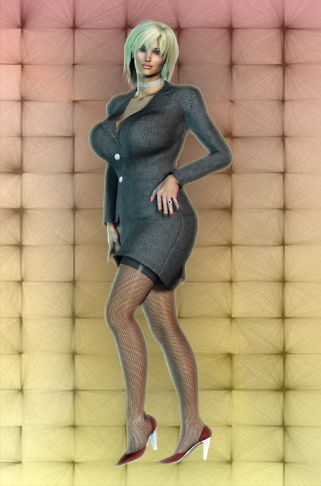 Afterwards, Andrea set her sights on Metrobay, seeing the corruption that Max Indeks and his APEX Industries brought to the otherwise inglorious city. Seeking a straight-forward takeover of the company, Max set his own plans in motion, kidnapping and enslaving Andrea’s personal secretary, Nicole, to aid them in capturing Andrea herself.

Andrea sensed a trap and tried to directly apprehend Max in the guise of Azure Avenger, but Max used Nicole and Andrea’s Superheroine Squad-ordained bodyguard, Violet Star, whom Max had mind controlled with a control collar, as hostages, forcing Andrea to surrender.

Andrea was enslaved by Dr. Patel’s “nano-leash” invention and then used by Max as the leader of his newly-formed APEX Alliance, created as a rival heroine group to the Superheroine Squad, with none other than Azure Avenger herself leading them, all while under the firm control of Max Indeks.

However, Andrea had expected such foul play and recorded the event, sending her old partner, Onyx Thunder, the information. However, Onyx Thunder knew she’d have to confront her old friend if she hoped to get the evidence they needed or to free her from Max. Until then, Andrea remains fully devoted to carrying out Max’s bidding.