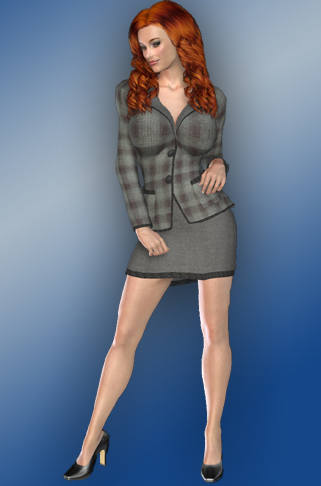 There are some people in this world who have nothing going for them. They have an unfulfilling career, a joyless home, and a nonexistent social life. They drift aimlessly day to day with neither the means nor the motivation to make things better for themselves. Jane Baker was one of those people.

After finishing college Jane worked at a series of menial jobs, each more dull and unrewarding than the last. Having moved to Metrobay when she was a teenager, Jane missed out on APEX Laboratories’controversial water-enriching experiments that helped so many of the city’s young girls grow up into healthy, gorgeous women. As an average looking gal in a decidedly above-average gene pool, she was at a disadvantage in a society that increasingly placed importance on superficial beauty and appearance. That is until one afternoon she answered an advertisement for a test subject at APEX Labs, thinking this might be her chance to do something different with her life. That day “Ginger Monroe” was born, leaving plain Jane Baker but a distant, faded memory.
Max Indeks personally supervised the experiment she participated in, which was to test out a new model of the Behavior and Body Modification Machine. After Knyght Fighter and Goldwing underwent the procedure, a flaw was discovered when they both ultimately reverted back to their normal minds and bodies. Max made sure the same mistake would not happen to Ginger Monroe. 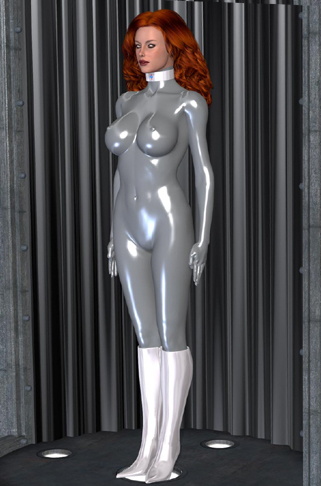 Ginger has been at Max’s beck and call ever since, blissfully doing whatever dirty job he has lined up, be it paperwork, espionage, or simple sexual gratification. Ginger’s abnormally high libido, surprisingly, has resulted in saving her a time or two; while Max wouldn’t hesitate to sacrifice his sexy plaything to save his own skin, as demonstrated when he thrust Ginger to an enraged Super Freak, Ginger’s uncanny ability to seduce and placate others netted her an ally and sexual companion instead of an untimely demise.

She has demonstrated surprising competence and efficiency, despite her lowered intelligence and free will, and has successfully carried out many assignments and covert missions under Max’s orders. She has a surprising knack for taking charge of situations, and has fully learned how to manipulate both men and women to her advantage using her sex appeal. She is currently eagerly intimate with several of her co-workers, and while she remains obedient to Max Indeks, she has become involved with both Super Freak and Dani Jordan, taking a dominant role in their relationships

Ginger was also the one who helped distribute the new Greentooth Earpieces to select individuals who unknowingly became pawns of Max Indeks and his schemes. Ginger expressed a distinct interest in RollerGrrl during this mission, though this was possibly only because Ginger’s modified sex drive is almost entirely non-discriminate towards gender, age, or allegiance. Her raging sex drive was also copied from her into the android MilkMaid, along with other characteristics. She has also flirted with Silver Satin, during the midst of combat, and appeared to be unable to distinguish her actions from sexual foreplay. Despite Max’s insistence that she assist him in missions, usually under the alias of “Agent 69”, she does not appear to be at all skilled in combat. In the truest sense, she’s a lover, not a fighter.

Recently, she was seen as the career services representative at Metrobay University, deferring young attractive women into R.O.P.E.-controlled jobs. She directed young Penny Nichol to the restaurant “Headlights”, owned by Vic Reno, whom it is implied she shares at least some sort of relationship with. 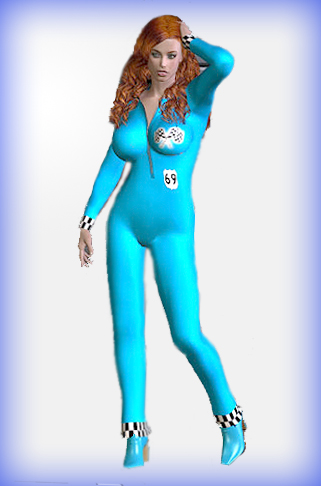 Following this, Ginger grew progressively more jealous of the time and intimacy spent between Max and Dani, while she felt neglected and old compared to the younger new woman. In a surprising act of rebellion and independence, Ginger orchestrated an elaborate tryst between herself and various greentooth earpiece wearers, including Dani, Warden Smith, and Omega Woman, the latter of whom she took particular interest in and left specific instructions for. Ginger then brought Dani back to APEX Labs and used a reconstructed conversion chamber to turn her rival into a mindless human robot.
Her brief taste of authority and control was quickly stripped away from her when an enraged Max discovered what she had been up to, and in a spontaneous display of vengeance, he forced Ginger through the same procedure. A remorseful Ginger’s last act of free will was to confess her love for him and ask his forgiveness, but Max went through with the process, creating another human robot stripped of any emotion or free-will, whom he named “Gingerbot”, while nonchalantly wondering how he’d find a proper replacement for her.