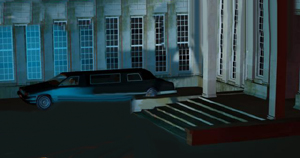 R.O.P.E. Mansion is an old, large estate that has been a landmark in Metrobay for over a century, standing as an example of elaborate, lavish architectural design and modern practicality.

R.O.P.E. Mansion is owned collectively by the Circle of R.O.P.E. and is funded through the various charity events that frequent the mansion. The mansion has been the stopping ground for circuses, stage shows, movie premieres, and even video game tournaments, all of which are exclusive to R.O.P.E. members.