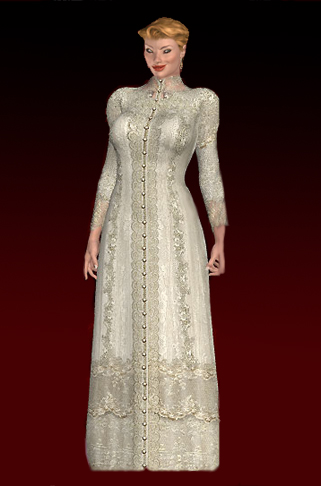 There are some people that are just made to be together as if it were pre-ordained by the stars themselves. Vivian and Max Indeks are such a couple. Max may be one of the most evil, power-mad, depraved, heinous, ruthless, cunning, shallow, diabolical, callous, perverted, ego-maniacal, and self-centered individuals Metrobay has ever known….. but Vivian is just as bad, if not worse.

Vivian and Max were childhood playmates, their parents both being extremely wealthy associates that often brought their children with them on visits and social occasions. Max and Vivian spent many years together growing up spoiled rotten, both enjoying the other’s company as they matured into their teenage and college years. They definitely shared mutual disdain for the poor and downtrodden citizens of Metrobay, firmly believing that power should rest solely in the hands of the upper class.

Vivian and Max began seriously dating in college, largely due to pressure from their respective families. Despite being attracted to Vivian’s natural beauty and wealth, Max was more interested in retaining his bachelorhood and had little intentions of settling down.

To no one’s surprise, one day Vivian discovered Max enjoying the pleasure of another woman. In a move that both shocked and aroused the scoundrel, Vivian was neither livid nor distraught, instead slipping out of her expensive gown and sliding under the covers with Max and his latest conquest. It was at that moment, specifically when Vivian was sandwiched between Max and his bedroom playmate, that Max realized he would never find a woman who understood his needs and longings – or who would grant him such unbridled sexual freedom – as much as Vivian did. The two quickly wed in a lavish ceremony and enjoyed an extended pleasure cruise before returning to Metrobay.

Their return home was marked with the tragic news of the death of Vivian’s father, Walter Wellington. Her grief at his passing was tempered by the fact that she and Max were bequeathed APEX Industries, the high-tech research corporation that Max had been unofficially running since Walter first took ill years earlier. The Wellington family is one of the oldest and wealthiest bloodlines in Metrobay, and Vivian has many distant relatives scattered throughout the city. One such relative is the young Alexis Wellington, daughter of Walter’s brother Charles and better known to the public as the Superheroine Squad member Solaria. She’s also the aunt of notorious badgirl, Pristina Wellington, who masquerades as the criminal Babydoll. Though Vivian was pleased to receive control of APEX in her inheritance, she was furious to discover that her family’s residential high-rise, Wellington Tower, had been willed to a previously unknown woman named Kaitlin Sinclair.

Vivian quickly grew to despise her cat-loving fellow socialite, whom she felt was an outsider invading upon her turf. Kaitlin’s upbeat personality and apparent indifference at Vivian’s contempt only furthered her bitterness towards her. Almost as if by design, Vivian developed a bit of a dog and puppy fetish to counteract the cat-crazy Kaitlin, and she’d love nothing more than to see Kaitlin barking at her feet.

Vivian was instrumental in helping elect Max Indeks to the leadership position at R.O.P.E. and has been rather good friends with fellow R.O.P.E. member Ava LaPette, with whom she shares a mutual dislike for R.O.P.E. member Robin Ravenwood. She is, however, on very poor terms with her petty and jealous sister, Delilah, whom always felt Vivian was the favored child of their parents. Vivian often comes to her husband’s aid during times of crisis, displaying her ingenuity and cunning in helping clean up some of his more messy criminal endeavors and keeping herself and her dear husband at the absolute top of Metrobay’s corporate and criminal ladders.