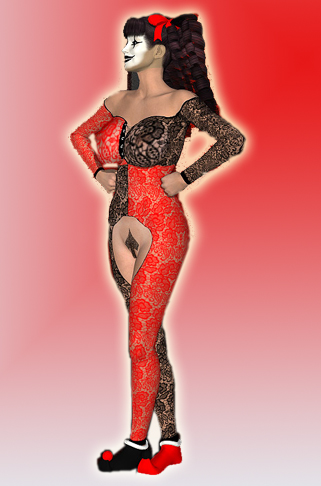 Mimi Panto was a troubled girl – anti-social, awkward, and possessed of a vicious mean streak – but still carrying a strangely optimistic and bubbly personality with her wherever she went. She found smiling to be her best defense at dealing with all of her problems, but as her problems grew larger and magnified in intensity, so too did her smile, until it was seared into her twisted psyche.

Mimi found herself unable to function in normal society, her rattled brain too distracted and fractured to coherently perform even simple tasks. She instead drifted from job to job with the same effervescent, carefree attitude that guided her life. She wanted nothing more than to play and be happy.

Mimi was discovered by the Black Hat as his Carnival of Sin made its rounds through her town. He immediately sensed she didn’t belong, that she was a social outcast, a freak, and offered her a position as a circus performer. Soon, Mimi was touring with several kindred spirits, wearing a painted smile and finding a use for her clinical insanity. 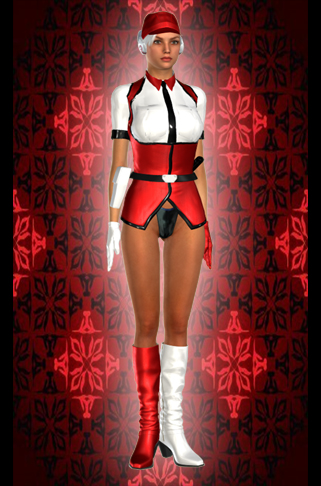 Unfortunately, the company she toured with were some of the more depraved individuals around, and she quickly picked up many of their personality traits and quirks, morphing her from an already mentally unstable young woman into “Clownetta”, the mistress mime of mischief and clown princess of crime.

After Black Hat and his Klown Krew were shut down by Pink Pussycat and the Action Cats, Clownetta went solo, continuing her diabolical act and catching the attention of several superheroines. However, without a strong leader to guide her disjointed thoughts and half-baked schemes, Clownetta has proven to be a rather ineffective villainess. She has nevertheless used her undefinable modus operandi and incoherent chain of thought to catch more than a few heroines off guard, including the likes of Bluebird and Sparrow.