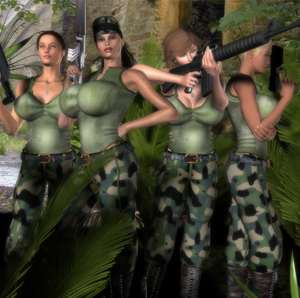 The Foxy Commandos are an elite group of Black Ops soldiers and mercenaries recruited by General Ulysses G. Longcannon for a variety of classified missions and combat engagements. Their missions were deemed of highest importance to national security and only the most physically capable and mentally sharp women were recruited. The government continues to deny their existence, and should any squad member be captured or exposed, the government would deny any knowledge and responsibility for their actions.

With such vital and volatile activities under his surveillance, General Longcannon began to fear any signs of emotion or human weakness that might compromise the missions. He began conditioning his soldiers through a ruthless barrage of mental and physical programming, to become the most obedient and efficient soldiers on the planet, unquestioning in loyalty and capable of carrying out instructions with machine-like resolve. Few of the Foxy Commandos submitted to this conditioning willingly, though it was so thorough that after being processed few were even aware they had been brainwashed unless triggered by their superiors to complete their missions.

Two Foxy Commando members of note are Georgia Brown, who left the unit and went off-the-grid to become the masked vigilante Brown Sugar, and Amelia Applegate, who was recently chosen as the test pilot of the prototype Afterburn flight suit.