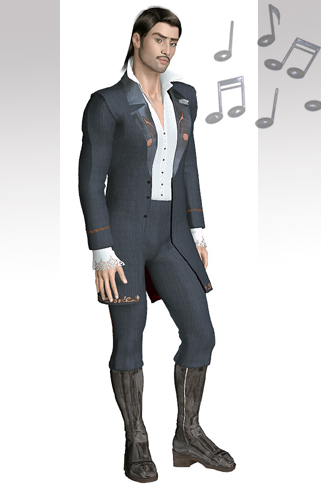 Pierre Pavlova was once a hot commodity in Metrobay, riding a wave of new age hysteria into million dollar record deals with his unique and original brand of relaxing classical music.

However his glory was short-lived as the younger generation moved on to the next fad. Pierre’s once sensational sales began a sharp and steady decline, and the self-titled “Pied Piper of Pleasure” found his vast fortune vanishing almost overnight.

Bitter and angry, Pierre turned towards a different avenue of musical creativity, restructuring and reworking his new age, mind relaxation musical techniques into a wield-able weapon of audible potency. He crafted a one-of-a-kind flute capable of emitting musical frequencies at a finely tuned level which would ensnare any listener to his own dastardly desires. Pierre used his new tool to hold on to the wealth and luxury that had nearly been stripped from his hands.

Max Indeks quickly saw potential in the downtrodden musical star and offered him a chance at a comeback of sorts, this time in league with the Circle of R.O.P.E. Pierre readily accepted Max’s offer, for he was desperate to maintain the lavish lifestyle he had become accustomed to. Becoming the supervillain known as “The Maestro”, he partnered up with fellow criminal musicians Aria and Melody, forming a trio of dissonant deviants ready and eager to show the world their new brand of music.

Pierre has a knack for musical composition. However, the real key to his criminal career is his custom-designed flute which has been created exclusively to allow his hypnotic melodies to come to life.