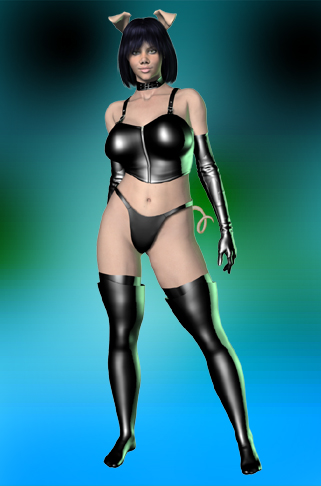 Imma Iglettia is a peculiar young woman… as well as a potent foe for Metrobay’s law enforcement. Most people try their best to escape the grime and filth of Metrobay’s Grime City slums, but Imma instead seemed to thrive in the grime and dirty dealings surrounding life there.

She decided quite early on that, rather than fight that system, she would embrace it… even control it. Dropping out of high school, she decided to focus all her energies towards establishing her own little empire. Re-emerging into the spotlight, she seemed “changed”, sporting noticeable porcine features, earning her the name “Lady Swine”, and gifted with a ruthless acumen and unstoppable resolve. Rumor and speculations among her followers say she made a deal with a corrupt pig god in return for power and success. Soon, she was acquiring swarms of devoted followers, eager to join her rise to power and prominence, and she only endeared herself to her newly formed “Piglet Gang” by giving them ample sharing of all her profits… be they stolen goods, luxuries, women, or whatever else their carnal desires longed for.

Soon, she had established herself as one of the youngest and largest crimelords in Grime City, with common and lowly thugs and criminals flocking to her for guidance and riches. Soon, Grime City didn’t seem enough for her, and it wasn’t long before Imma cast her eyes to the whole of Metrobay.