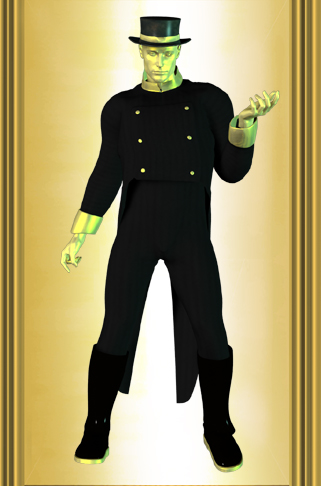 Much of Midas Kingston’s past remains a mystery. However, what is known is that he is a foreigner, and a very wealthy one, from a distant country.

At some point, Midas became “cursed” with the power to transform whatever he touched into pure gold, just like the king of legend. However, unlike the fabled king, he managed to harness and control the ability, able to turn things into gold at will. More so, he found he could control gold itself, reshaping its form and function, even creating golden servants and slaves to assist him in his corrupt bidding.

Now in possession of a great power, Midas’s wealth skyrocketed, and his obsession with gold grew into a mental breakdown. Obsessed not just with creating gold, he sought out anything that remotely had to do with gold to add to his vast collection. Coming to Metrobay, he took up residence in the former Metrobay Museum and began stockpiling his creations and his ill-gotten goods. He quickly learned that there are some things even money can’t buy…

It didn’t take long before a woman discovered his gift and, seeing the potential, swore herself as his right-hand woman, renamed Golddigger. With her help, his collection has grown larger and larger, but it’s not enough for quench his thirst and his greed. It won’t be long now before he runs afoul of the Superheroine Squad… but will they stop him, or will they just become the newest pieces in his vast collection?