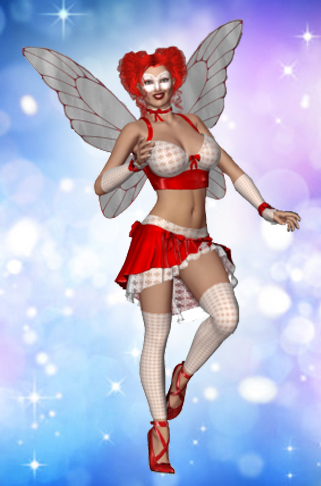 Not much is known about Excitemare, or her partner-in-crime (and occasional lover) Ebeneezie Snooze. Both are members of a race of mythical winged beings known as “Nymphs”, who all have fantastic magical abilities and are mischievous enough by nature to use their powers for naughty purposes.

A furious Omega Woman took matters into her own hands and forced Excitemare and Snoozie to reveal their boss, who was none other than Max Indeks. Both flew off after escaping from jail during the infamous Superheroine Squad vs. APEX Alliance battle, and have not been heard from since.

Excitemare is able to use her magical abilities to secretly influence the dreams of people as they sleep. However, her powers cannot actually put people to sleep. That’s what makes her relationship with Snoozie so crucial. These victims fall under her thrall and can literally sleepwalk their way through acting out whatever devious thoughts she plants in their minds. She is an expert in psychological manipulation, but has limited offensive capabilities.

Notable Appearances: The Doctor Is In, Pleasure Island, The Omega Mystery