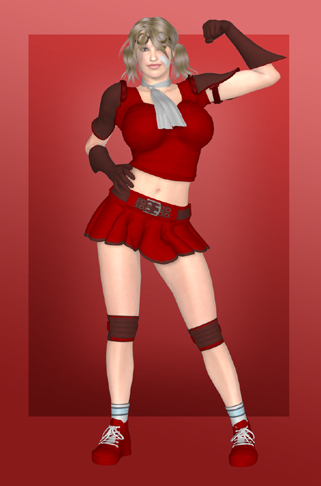 Emma McCloud was just an average girl from Metrobay until one day, while daydreaming about being like one of her heroes from the Superheroine Squad, started to display her ability to fly. Instead of being afraid of what was happening to her, she became determined to see what she can do. After testing her limits with her very own “How to be a Superhero” checklist that she put together with her vast comic book knowledge, she sent in her application along with a tryout video to the Squad in hopes to get that much desired call. And that call finally came in along with her first mission… To help back-up Snowflake and Solaria investigate a seemingly abandoned theater.

Flygirl has the ability to fly at a top speed of 88 mph and, with her level of invulnerability, can pull off a move that she tends to boast as the ‘Dasher Crasher’. While she shows some above average strength, it can be compared to more of a tow truck lifting a car than the display of strength of someone like Valient Grrl.

If any word could best describe Flygirl, it would be ‘fan girl’. Her ‘known’ knowledge of the Superheroine Squad and other heroes could be considered unparalleled, citing situations and adventures of the team often. But while she has a big heart and a can-do attitude, her lack of experience and her desire to impress her heroes tend to overshadow her common sense.