“Gateways” are dimensional rips in time, space, and reality used to transfer an object or individual across different planes of existence. The two most promiment gateways are Dimensional Portals and Time Gates. 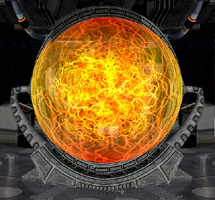 Dimensional Portals
The Dimensional Portal is a reality-distorting device constructed after centuries of research and development since the late 19th century. It was worked on by various intellectuals throughout history, including Woodrow Strangecraft, Feelix von Ick, and Draven Ophidian. The device creates a shift in the spectral plane, allowing cross-dimensional passageway. However, it remains unstable, and it is still unable to specify unique dimensions. During one such experiment, the demon Lascivia escaped from the realm of Hades through an open Dimensional Portal in the human city of Metrobay. 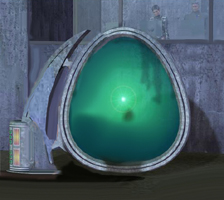 Time Gates
The Time Gate is a massive collaborative scientific effort concocted by APEX Laboratories in the year 2169. Using highly advanced technology, the time gate is able to create bridges between time periods, allowing travel across the 4th dimension. The process was heavily tested using cloned humans before being approved safe for ‘normal’ human use, despite many of the clones disintegrating or receive severe physical and mental trauma during early tests. The process is still considered highly dangerous, not only on a physical level, but it also risks violations of the space-time continuum. A subject travelling through time must do so without clothing as nothing inorganic can be processed through. The time gate is a highly kept government secret but has been used for covert operations, including a mission involving Inspector Cross and Draven Ophidian.