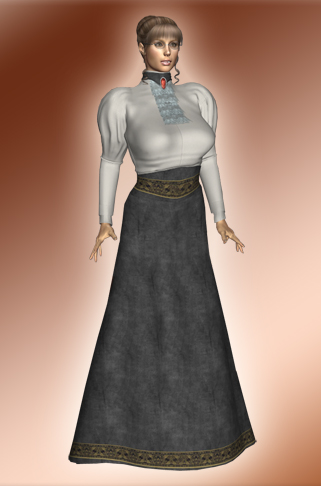 Two decades ago, the hottest star in Hollywood was the irresistible and alluring Madeline Moore, a statuesque beauty and the lusty dreamgirl of millions of viewers.

Harriet Blumberg certainly never expected her star to rise so quickly or burn so brightly. She was a humble girl working a typical 9-to-5 job at the Metrobay Market & More Factory when she caught the eye of a talent scout who thought she had just the look he was searching for. He promised her he’d make her a star.

A hairstyle, wardrobe, and name-change later, and Harriet was reborn as “Madeline Moore”, the foxy romantic lead in countless blockbuster films. The critics praised her, her fans adored her, and she found herself caught up in a whirlwind world of movie-making magic and Hollywood’s most elite social circles. She became a two-time Webster-winning actress for her dramatic turns in the films “Some Like It Warm” and “Brunch at Cindy’s”. Possibly her most famous – and infamous – role was that as the romantic lead in the film “Gigantic”, the harrowing story of a doomed love affair aboard the sinking ship, the S.S. Gigantic, a role most remembered for her highly anticipated and widely replayed nude scene. It was a smash hit, and she received a star on the APEX Theater Walk of Fame upon its premiere.

It wasn’t long before the tabloids and paparazzi began to obsess over her every move. She was rumored to be in relationships with countless hunky men (and some women), but she soon grew frustrated at her lack of privacy and respect. The last straw came when tabloid journalists burst in on her on a weekend retreat while she was in bed with a famous actor, the actor’s unmentioned wife having tagged along and confronting her cheating husband and exposing the couple to the world. Humiliated and fed up with Hollywood life, “Madeline” retired from the spotlight and returned to being plain old “Harriet Blumberg” once more.

With her award-winning reputation, Metrobay University was quick to hire her to teach drama classes to their aspiring pupils. Harriet has taken to dressing quite modestly, hoping that by covering up she might keep her once-notorious status as a Hollywood Sex Symbol subdued, especially around so many hormonal college students. While many students find her strict and abrasive, she teachers with passion and heart, hoping to provide her students with a transcendent education that hopefully prepares them for the challenges she herself struggled to overcome.