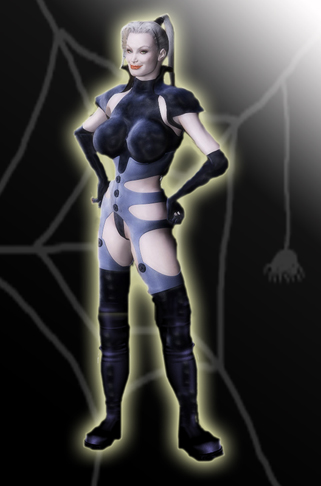 Irene Webb has one love and one love only: science. She has neglected everything else, friends, family, and romance, in her pursuit of deeper and more intimate understandings of the world around her, of understanding the unknown, and seeking to harness such prohibitive powers.

Irene was a brilliant little girl throughout her academic career. She was classmates with Ted Twiss and Raquel Summers at Metrobay University but neglected her social life to concentrate on her studies. She inwardly detested Ted’s natural brilliance, which seemed to come so effortlessly, and loathed Raquel’s kind and loving nature, which she viewed as a hindrance in the field of science. After graduating with top honors, she interned at APEX Industries, where she quickly began working on some of the more ethically questionable projects.

It was around this time that she began to read the journals of the late Woodrow Strangecraft and became enamored with his findings on the supernatural. Frustrated with the limitations of modern science, she broke away from APEX to begin studying the occult, engaging in highly unethical and taboo experiments, all in the name of “science.”

Irene’s insane dedication to supernatural science has allowed her to make remarkable breakthroughs in understanding the exact nature of magic and its relationship with the technological world, but it has also left her an extremely cold and uncaring individual, with much disregard towards others’ comfort or well being. She has resorted to kidnapping, grave robbing, and blackmail to obtain specimens for her experiments, with quite a number of them being changed irrevocably, suffering intense mental trauma, physical mutations, and occasionally death. 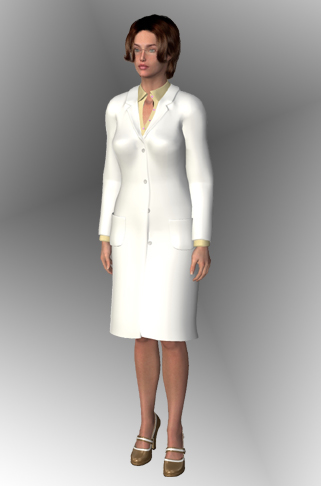 None of this has stopped Irene from pursuing her ambitions with greater zeal and dedication. The suffering and pain of a few are a worthy price to pay for the scientific breakthroughs they would help usher in.

However, her carelessness with the funds entrusted to her quickly left her with a large debt and little productive results to warrant any more substantial loans. Looking to profit from her hardship, the ruling council of R.O.P.E. offered her a lucrative job outside of the jurisdiction of APEX, much to the dismay of their chairman Max Indeks.

Irene agreed to the stipulations and was brought in by the Circle of R.O.P.E. after the disaster of the Sentius ordeal and instructed to use her talents to help launch a more effective offensive against theSuperheroine Squad. Irene began by abducting Mesmerella and using her temporary bodyguard Super Freak in a fiendish experiment to help raise the infamous Kikka Brust from the grave, hoping the combination of magic and radiation would prove effective in defeating death itself and giving birth to a superior life form.

However, during the course of carrying out her very first job something very unexpected occurred. She succeeded in bringing Kikka back to life, but instead of having control over the reawakening tyrant she found herself instead enslaved by Kikka’s newfound magical powers. As a result the villainous persona of “Noctrissa” came to life, springing out of the damaged psyche of Irene Webb and taking over her body for what could be a very long time. She now serves the resurrected Kikka, now known as “Gothikka”, as her right-hand servant of evil.

Noctrissa used her intellect and APEX technology to create spider-like robots to assist her in her devilish schemes and currently seeks to acquire more slaves to suit her mistress’s whims and ambitions. She has acquired an understudy in the person of Spideretta, who idolizes Noctrissa and aspires to match her level of genius and ruthlessness. She’s also been shown to be cohorts with the sociopathSinister Minister. She’s continued to help lure in victims for her mistress while simultaneous dealing with meddlesome heroines of her, recently including the likes of officers Daisy Sanchez and Maggie MacGilleycuddy.