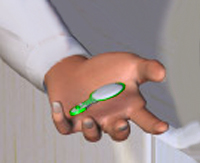 The Greentooth Earpiece is a supposed revolutionary new method of hands-free communication developed by APEX Laboratories to ease the burden associated with traditional wireless phones and pagers.

In reality, the greentooth earpiece is a sinister form of subliminal messaging that emits an undetectable signal directly into the wearer’s brain and rendering them vulnerable in a state of extreme suggestibility.

Through the greentooth earpiece, any instructions or suggestions given to the wearer are scrambled about with the wearer’s own thoughts, making the commands and the wearer’s own thoughts indistinguishable from one another. The signal will simultaneously gratify the wearer’s own body by stimulating certain nerves, heightening the effectiveness of the commands and raising their suggestibility. Even when not directly active, it appears to have lingering side effects including hightened arousal and lowered inhibitions, as well as residual thoughts and emotions from previous commands. 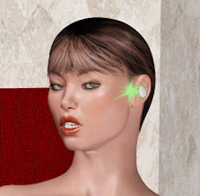 Unlike traditional forms of mind control, this form is more appropriately in line with “personality” control. The user is aware and conscious the entire time control is asserted and tends to believe their actions and thoughts are their own and will act accordingly. A wearer can be made to feel affection for another, regardless of gender preference, or to perform actions they might otherwise consider to be illegal or immoral. However, side-effects appear to be short term memory loss of the entirety of their mental manipulation, but post-hypnotic commands and instructions will nevertheless be completed.

The greentooth earpiece is apparently very popular and has a rather large consumer base, leaving the greentooh earpiece as a subtle but effective form of control for APEX and Max Indeks. The effectiveness of the product has already lead them to assert control over Warden Smith, and subsequently Metrobay State Prison, as well as the Mayor’s Office itself, ensuring that Mayor Turner will not prove to be an obstacle to their plans.

The greentooth earpiece also has the ability to scan and read the brainwave patterns of its wearers, transferring the data via X-Band to the computers at APEX Labs. This feature can be used to obtain secrets and hidden fantasies, or in the study of artifical intelligence. For example, the android doll known as MilkMaid was programmed with personality traits obtained from various earpiece wearers.