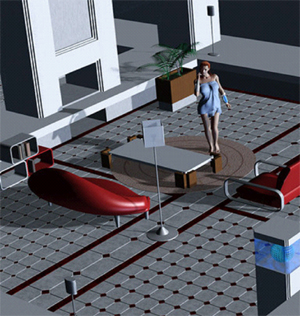 Silver Satin, also known by her given name Marcy Smith, purchased this stylish, ultra-modern townhouse with some of the money she received as compensation from the incident that transformed her into a cyborg woman.

Chief Coleman and Ms. Metrobay, on behalf of the Metrobay Police Department, negotiated a settlement between Marcy and APEX Laboratories, which created the rogue artificial intelligence unit called “Sentius”. Max Indeks, chairman of R.O.P.E. and owner of APEX, agreed to the terms of the settlement rather than risk a lawsuit and public exposure of more of his company’s nefarious deeds. As part of the settlement APEX took the blame for Sentius’s initial actions, although few are aware of Max’s subsequent misdeeds which led to the infamous “Night of the Drones”, including Marcy herself.

The townhouse features many state of the art amenities, and is perfect for a modern career woman like Marcy. She currently shares the house with her android roommate Mechana, who is known to stay behind to play homemaker while Marcy is out fighting crime as a member of the Superheroine Squad.

Like many other heroines Marcy also has a small suite at Superheroine Squad Headquarters where she can crash after a particularly tough day on the job, or if she plans on spending long hours in her crime lab and doesn’t want to make the trek out to Metrobay’s suburbs to sleep in her own bed.