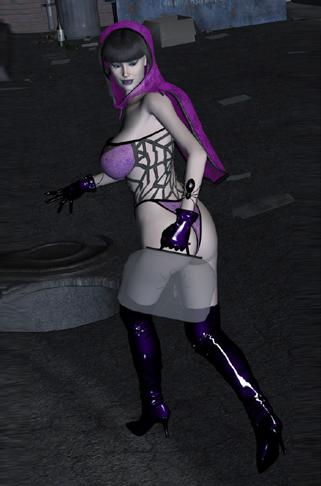 Sally Spitser is a black widow, accustomed to seducing men, charming her way into their lives, then leaving them broken and penniless. While she has wooed and wrecked many men, she is in truth disgusted by them and views them as nothing more than crass, chauvinistic pigs.

Susie later began hearing and reading reports about the dangerous and beautiful crime mistress Noctrissa and became infatuated with the deadly siren, seeing her dark and liberated views as wholly admirable and appealing. Using her misbegotten wealth, she fashioned a criminal identity of her own and began training, hoping to track down her idol and offer her services to her.

Ultimately, Spideretta was successful. But while Spideretta is more than satisfied to serve at her mistress’s command, Noctrissa is far less sympathetic towards her young pupil’s well-being. Noctrissa herself only cares for herself and for her own mistress, Gothikka, and views Spideretta as a useful tool, one which she’d have no qualms about manipulating, using, and discarding should she prove to be a hindrance to her plans. But for now, Noctrissa is content to keep Spideretta around as long as she proves her worth.