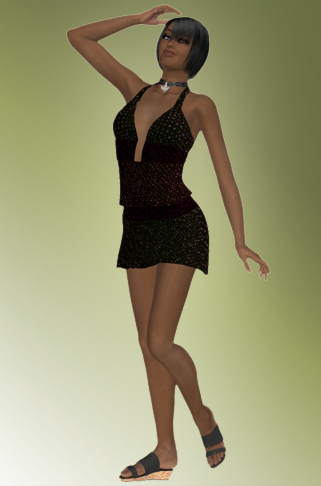 Cyber Grrl was a young heroine skilled in the art of computer sleuthing and technological detective work. She was trained by the Metrobay Police Department and a member of the Superheroine Squad for a very short time before she was kidnapped by a then-villainous Enchantress and her hired goons The Boyz as a pawn to get to Pink Pussycat and Clawdette.

Discouraged by her failure, Cyber Grrl resigned from the force to start her own computer repair business and teach part-time at Metrobay University. Wanting nothing to do with her past career, the former Cyber Grrl left her costume and equipment in a box at Police Headquarters. Sentius discovered the discarded items one night and would later use them as the basis for the cybernetic uniform he crafted for the robotized Marcy Smith.

After the destruction of Sentius, Marcy was codenamed “Silver Satin” and essentially took over the position of the Squad’s technology expert, a role that Cyber Grrl had once provided. It is not known if Cyber Grrl and Silver Satin have ever met, despite their close ages and similar education and career backgrounds. 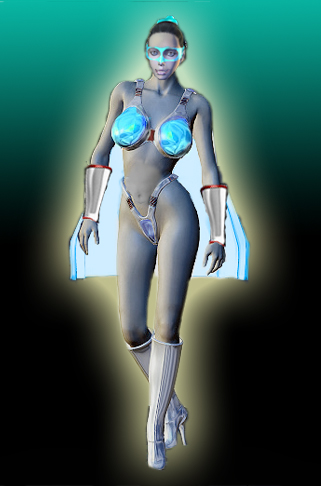 Megan’s name was recently put forward by Ginger Monroe as a potential candidate as an enslaved waitress at the “Headlights” restaurant.

Megan resurfaced recently in the pages of “Sword & Shield” where it’s been revealed she’d happily retired from crimefighting and had entered into a relationship with Kari Lai, who, along with her twin sister Mari, decided to become crimefighters themselves. Against her better judgment, Megan agreed to serve as their adviser and technical support.

Of note, Megan proudly bares a unique and identifying tattoo on her back.

Megan possessed no powers, but she developed her cybernetic uniform to be able to assist her in battle by reading her neural responses. When her costume was modified and adopted by Silver Satin, this integration became seamless and her uniform became a literal extension of Silver Satin’s body.