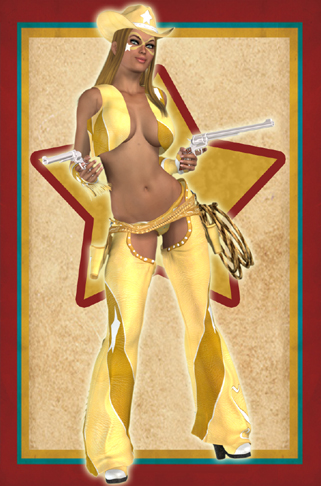 Born in the backwoods of Hooter County, Shirley McDonnell was always a trickster growing up. She delighted in playing pranks on her teachers and parents and delighted her friends and peers with her innate lassoing skills.

When Shirley was 14, she became a ranch-hand to her neighbor’s farm, wrangling cattle and helping out at the ranch. It was a pleasant life and career for a young girl, but she wanted more. Excited by the drama and action displayed on the television show, Calico Kitty, Shirley wanted to move beyond her mundane lifestyle.

Unfortunately, she discovered that Hooter County was a poor location to be a hero. Stumbling upon a crime in progress from the lawless Lady Luck, Shirley tried to use her sharp shooting and natural rope tricks to apprehend her, but she escaped. She become jaded and disappointed when she attempted to inform the sheriff and police of experience, but she wasn’t able to produce any solid evidence. Further infuriating her, she herself was fined for causing a public disturbance and for carrying an unlicensed weapon.

Shirley grew disgusted with her backwoods town and joined a troupe of traveling rodeo performers. On the road, she acquired a rope she discovered was nearly unbreakable and used it to perform in her shows. Through the years, she become one of the best wranglers and trick ropers in the business.

During one performance, she was approached by a mysterious stranger, whom she discovered was none other than the former villainess she once tried to apprehend. To her surprise, Lady Luck said that she was impressed by her skills and offered her a place under her watch, with the promise of all the wealth and respect she could ever want. Forgoing the heroics she once sought, Shirley decided to join the villainess, swayed by the lure of fortunate and fame, as well as a personal vendetta to give her own brand of payback to the justice system that failed her and humiliated her, Shirley become Lonestar, mercenary for hire, more than eager to use her extensive tricks and abilities to make anyone in her way fear and tremble.

Powers
Lonestar possess natural skills as a sharp-shooter and an expert grasp of rope tricks, wrangling skills, and knot-tying competencies. Her most noteworthy accessory is an unbreakable lasso which ensures that whatever she ensnares can never escape her grasp.
Notable Appearance: Sex Pets of the Wild West