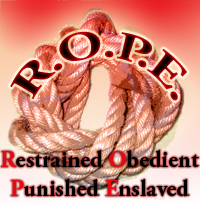 The Circle of R.O.P.E. (Restrained, Obedient, Punished, and Enslaved) is an underworld organization established in the latter part of the 19th century by the city’s wealthiest and most distinguished so-called “gentlemen”. R.O.P.E. wanted world power to remain in the control of the social elite and not under the sway of the common folk. As they observed social changes withdrawing power and influence from the elite, they decided to merge their wealth and influence to covertly enslave the world and ensure the continued rule of their own kind.

Their ambitions quickly grew more corrupt and deplorable, and as equal rights, suffrage, and freedom spread throughout the world, their numbers and influence dwindled, leaving only a select few, powerful members. These members decided to jointly purchase an old castle on a seaside cliff overlooking Metrobay, pouring millions into its renovation and rechristening the building as R.O.P.E. Mansion.

Membership in R.O.P.E. is by invitation only, after confirmation by the Circle’s executive council. A prospective member must be independently wealthy, sexually liberated, and place the values of the organization ahead of society’s needs. Those who do not meet the three requirements (usually the first) but do have a specific skill to offer are occasionally accepted as ‘associate’ members, though the full members often look down upon them as little more than hired help.

R.O.P.E. has had many notorious dealing throughout the past century and a half, notoriously supporting the Nazi agenda and engaging in many highly illegal and unethical activities. Members became infamous for their highly perverse forms of amusement and entertainment, a pastime that is heavily promoted and encouraged to new members of R.O.P.E. The Circle was at one time lead by the charismatic Draven Ophidian, and now appears to be controlled by the wealthy and maniacal Max Indeks, owner of APEX Industries.

It goes without saying that R.O.P.E. has acquired many enemies during its long presence in the free world, including but not limited to the Agents of D.E.S.I.R.E., Action Cats, and Superheroine Squad.