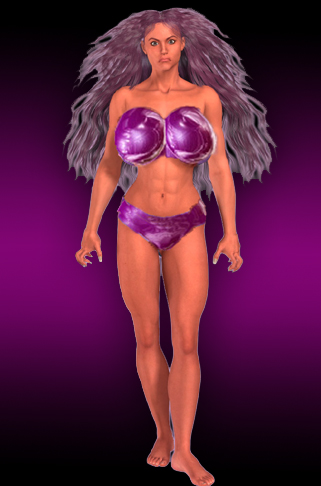 If you look up ‘meek’ in the dictionary, right beside the definition you might find a picture of one Shelley Calvin, possibly the kindest, sweetest young lady in all of Metrobay.

An honors student throughout high school and college, all she wanted to be when she grew up was a research scientist where she could use her intellectual gifts to help others.

Unfortunately, when she landed what she thought was her dream job at APEX Laboratories it turned out to be a life-changing nightmare. In her first few months on the job she reluctantly took part in many illegal and immoral experiments, and has openly regretted each one. She was much too afraid of Max Indeks, Belinda Giolla and her co-workers to blow the whistle on their operation, but after what happened to her Metrobay University classmate Marcy Smith it became impossible for her to stand by and do nothing any longer. After shutting down Max’s control over Marcy, Shelley was able to distract APEX security long enough for the heroine and her new friend Mechana to escape into the Metrobay night.

However, no good deed goes unpunished, and Shelley’s selfless act only landed her as the guinea pig in Max Indeks’s new Radiation Reactor machine. The procedure mutated the once sweet and petite young woman into a chiseled, towering paragon of feminine strength and arousal with an uncontrollable temper and feral mindset. Max quickly subdued this wild beast-woman with a refined control collar(and the help of fellow sexpet Ginger Monroe), rendering her a mindless and obedient caged pet just waiting to be unleashed. 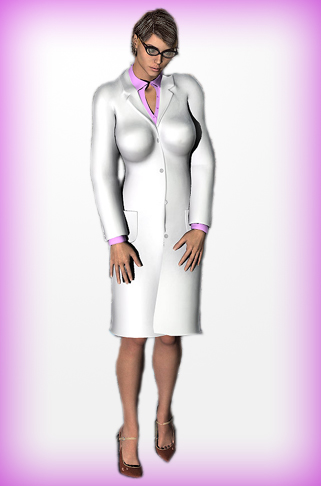 Super Freak, as Max had christened her, later ran into Silver Satin and her friends as Max attempted to stop them from awakening Omega Woman. At first Marcy hardly recognized Shelley, then expressed shock and horror at the fate of her dear friend. Able to stand toe-to-toe with the likes of Mechana, even Super Freak was unable to withstand the power of the reawakened Omega Woman and she was knocked unconscious in the melee.

Super Freak remains under the control of Max Indeks, serving as his personal bodyguard and love slave as he plots his eternal revenge schemes against the Superheroine Squad and Action Cats. She has become a very devout and efficient minion of Max and R.O.P.E., having been entrusted as the muscle of several operations, including a notable plot to assist in kidnapping and brainwashing veteran heroineMs. Metrobay. She and Ginger have also become very close, with her primal instincts and Ginger’s raging nymphomania complimenting each others’ carnal urges.

Shelley was subsequently “loaned” to the scientist Irene Webb and used to kidnap the magician Mesmerella. The two were then employed as living batteries – one magical, one scientific – to resurrect the inanimate Kikka Brust as the monstrous villainess now known as “Gothikka”.

Shelley was more recently seen brawling with a Psycho-slaved Valient Grrl when she and her mistress Belinda invaded APEX Labs, as well as distracting Indeks with her feminine wiles while Ginger eliminated Dani Jordan from the competition and turned her into a mindless graybot drone.

As Super Freak, Shelley is incredibly powerful and one of the strongest individuals in Metrobay. Her strength appears to be on par with the likes of Mechana and Valient Grrl, as she has fought each to an inconclusive finish. Along with her enhanced strength, she is also exceptionally quick, aggressive, and resistant to injury. Like a rabid attack dog, only the collar around her neck keeps her from going wild upon whatever target her master chooses.