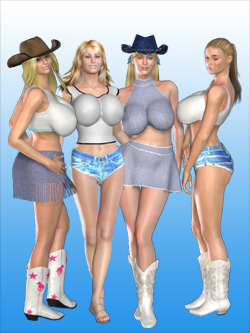 The West sisters are four attractive girls from Hooter County. The eldest three are notable for being triplets, with Kitty being the oldest, Kandy being the middle child, and Kathy being the youngest by a few short minutes. Their younger sister Kelly, who would grow up to become the heroine Ms. Metrobay, was born a few years later. The triplets are also noteworthy also for being the aunts to Kelly’s daughter Alpha Woman. The triplets share ownership and run the Three-Pair Tavern, a Hooter County landmark saloon that dates back more than a hundred years. Kelly herself eventually left Hooter County for the big city of Metrobay.

While it is unknown if any of the sisters have any powers similar to their youngest sister, it is known that they all share a delayed aging factor, giving them the youthful and vibrant personalities and physiques of women far younger than their given ages would imply. Due to their lengthy lifespans, many of the West sisters have had husbands, boyfriends, and relationships, having often outlived their partners. Despite this, with the exception of Kelly, none of them have had children of their own yet. Similarly, all the sisters are greatly admired for their rather impressive busts. While Kelly is famous around Metrobay for having the “biggest breasts in Metrobay”, rumors have it that Kitty is the biggest of the bunch.

From left to right: Kathy, Kelly, Kandy, and Kitty