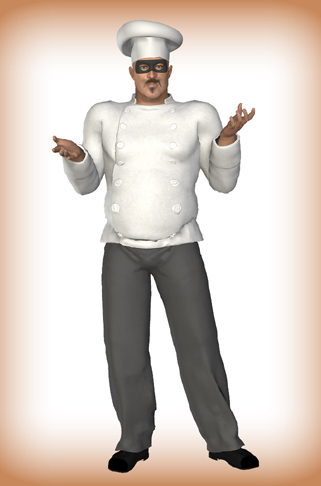 Emile Grosse is considered e Metrobay’s greatest chef: famous for his restaurant chains, fine cuisine, best-selling books, and popular H.E.R.-TV cooking show Essential Emile. He has catered to the wealthiest of the wealthy in Metrobay, rubbing elbows with the likes of Max Indeks, Walter Wellington, and Ava LaPette.

It was through these high standing connections that Emile was offered membership into the Circle of R.O.P.E. and asked to oversee R.O.P.E. Mansion’s in-house kitchen staff. He utilized his newfound fame, fortune, and social status to refine his cuisine to previously unreachable heights. Firmly believing that flavorful dishes matched the sensual potential of great sex, his depraved mind found kindred spirits with the members of R.O.P.E… and an outlet for his culinary perversions.

Pasty began to experiment with foods and flavors that other master chefs dared not trifle with. With the help of his business partner and occasional lover Delisha Deelite, he opened a hot new candy shop in town offering some of the most decadent sweets that ever passed human lips. The newly christened “Tasty Treats” became an overnight sensation, making customer and competitor alike wonder about the “secret ingredients” making their goodies so succulent and irresistible. Many a member of the Superheroine Squad was invited to drop by the shop to sample the offerings. More than a few of them gladly traded a few more minutes in the gym for a chance to wrap their lips around Pasty’s tastiest of treats.

With burning passion, Pasty and Delisha have churned out delicious sweets and pastries filled with the most sensual fillings obtained from his top-secret sources. At long last Emile could combine food and sex into a veritable orgy-in-the-mouth taste sensation… and be well paid to do it.

With all his newfound wealth and money, Chef Pasty has never been better… though his excessive spending and eating habits have started to catch up to him and he’s packed on the pounds in recent months.

Chef Pasty has abducted many women to serve as his “Sweet Tarts” and has even kidnapped and bound the heroine Solaria to a machine in his basement to power his oven. Recently, Pink Pussycat has stumbled upon a scheme of his to steal a rare cook book for purposes not yet revealed. He later cooked up even more trouble by joining Dairy King in a notorious superheroine dairy scheme in the “Sex Pets of the Wild West” series. Then the man of mean cuisine was seen frolicking amongst other R.O.P.E. fiends in the ‘Frostbitten” series.

His true diabolical plans remain to be seen.