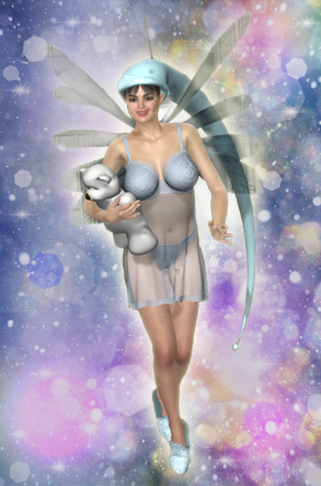 Alias: Snoozie Real Name: Ebeneezie Snooze Age: Unknown Height: 4’10” Hair: Black Occupation: Troublemaker Abilities: Sleep Induction Affiliation: NymphsEbeneezie Snooze hails from the same enclave of nymphs as her partner-in-crime Excitemare, and the two have been nearly inseparable since they decided to leave home and travel to the big city of Metrobay. Snoozie’s magical ability to make someone fall asleep in nearly an instant is a major benefit for Excitemare, who cannot cause sleepiness in her own right. Snoozie and Excitemare were instrumental in the creation of the android Omegabot. They were responsible for manipulating the dreams of Ted Twiss so he would build the duplication machine that constructed the robot, and they also coaxed Omega Woman to the Superheroine Squad Headquarters so she could serve as its physical template. Notable Appearances: The Omega Mystery