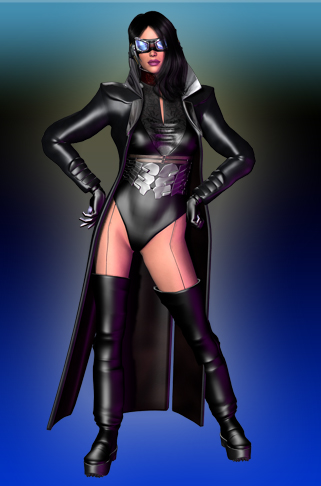 Growing up in the most vile parts of Grime City, Claire St. Cummins was no stranger to the depraved and violent world around her. Seeing so many innocent people victimized and taken advantage of, Claire grew up strong and emotionally withdrawn, refusing to be seen as weak or a target for those who prey on the less fortunate.

But even her efforts were not enough to keep those around her from suffering. Her father, a laid-off APEX employee, died under highly questionable circumstances and her mother soon disappeared. Neither case was ever solved, with the Metrobay Police Department ultimately ruling her father’s death a “suicide” and telling her that her mother had fled the state during a “nervous breakdown”.

Claire refused to believe this and became frustrated with the ineptitude of the law enforcement officials that were either unable or unwilling to look further. Deeming the cases closed and refusing to re-open them, Claire realized that the only person she could look to for answers and justice was herself.

Fashioning a dark and practical costume, Claire took up the name “Knyght Fighter” and began to impose her own brand of vigilante justice in her lawless neck of the woods. She left the bigger threats to theSuperheroine Squad while she acted on her own in Grime City, which allowed her to deal with criminal scumbags in a manner that perhaps the venerable and admired Superheroine Squad might otherwise frown upon.

Claire has begun to dig deeper into her father’s murder, finding more and more links to his sudden departure from APEX Industries and Max Indeks. During one such investigation, she ran afoul of the villainProfessor Spellbinder, who enslaved her and turned her over to Max, who was well aware of her personal investigation and vendetta against him. He passed her on to APEX Labs and allowed Doogan Tinkerto test out the newly developed Modification Machine on her, turning her from a pale, brooding, dark-haired predator of criminals to a blonde, tan, big-breasted bimbo stripper named “Sindee” to entertainR.O.P.E. members, completely oblivious of her past life as Claire. 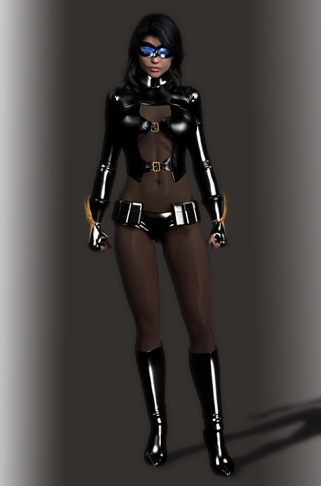 Shortly before this, she had been approached by an idealistic crimefighter named Goldwing, who idolized and begged Knyght Fighter to take her under her wing and show her how to be a more competent crimefighter, which Claire agreed to rather reluctantly. She did, however, successfully teach her young pupil how to be a thorough and competent detective and fighter, skills the novice Goldwing later appreciated when she later joined the Grrl Power cadets.

Goldwing used these very same skills in a desperate attempt to locate her missing mentor, unaware that the blonde bombshell hanging on to Max Indeks’s arm was the transformed Knyght Fighter. Goldwing’s prying almost exposed the truth, and Max quickly had her dealt with in a similar manner, turning the young heroine into a ravishing redhead stripper for R.O.P.E. member’s enjoyment.

Thankfully, there was a fatal flaw in the Modification Machine’s programming, and both Knyght Fighter and Goldwing reverted back to their given bodies and minds after a short time. 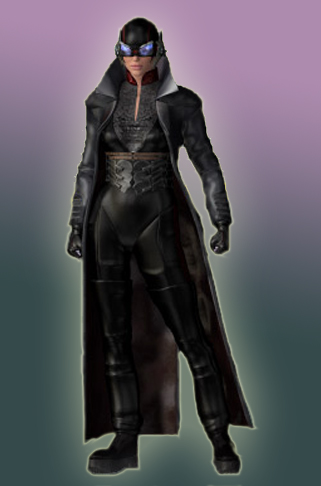 Knyght Fighter then withdrew back to Grime City to continue her investigation while Goldwing went her own way. Knyght Fighter recently stepped in as a short-term Superheroine Squad member when the majority of the other heroines were incapacitated due to the events of “Superheroine Squad”. Despite this boost in status, praise, and recognition, Knyght Fighter is still generally regarded as a loose cannon that treads a morally ambiguous line between fair justice and personal vengeance.

Recently, she assisted Omega Woman and Silver Satin in a rescue attempt to save several abducted Metrobay girls, including the heroine Brown Sugar. Despite her formidable prowess in handling the alien assailants, she was overwhelmed and enslaved by a hive-controlled Babydoll. Overwhelmed with her new powers and abilities, she and her hive sisters went on an assault in Metrobay, abducting more women. Knyght Fighter was eventually freed from her enslavement by Platinum Earth heroine Shrike’s unique emphatic abilities, restoring her to her proper mind and body. However, the concluding pages of the story revealed she retains some lingering side-effects.