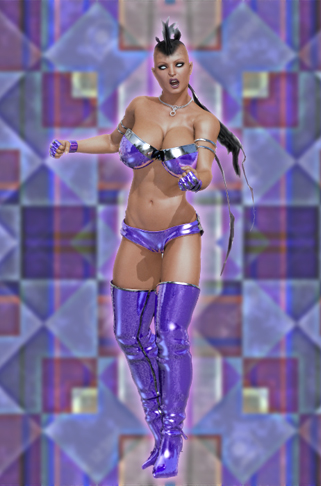 Makkitotosimew grew up secluded from most of civilization on one of the more remote Native American reservations situated in Hooter County, her tribe having long held disputes with neighboring tribes who had acclimated towards western cultures.

Her people were traditionalists and naturalists to a zealous degree, forsaking the modern world to commune with the spirits and animals of nature. While most mocked them as primitive people in a technologically advanced world, there was some semblance of truth to their claims.

Makkitotosimew was raised with a particularly sensitive reception to the cries of Mother Nature and a powerful link to the spirit world. She found herself able to draw strength and power from the animals and nature around her. However, she was so disturbed by the pollution and waste of modern society that she vowed to avenge the sacred Earth Mother and restore the world to its proper place, starting with Metrobay.

The newly christened “Bruiser” thus began a one-woman environmental war against APEX Industries and the rest of Metrobay, intent on leveling its society to the ground and putting an end to the industrial scourge that has left its mark on the Earth Mother. She will stop at nothing until the Earth prospers once more, and those that have misused her pay their dues.