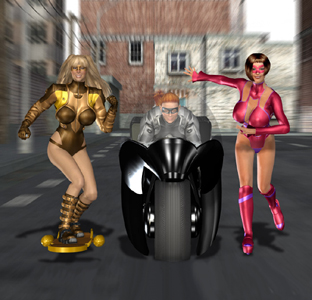 The Speed Demons are a small group of young heroines and friends with a mutual appreciation for speed, non-traditional sports, and fighting crime.

The group currently consists of DareDoll, Shadow Rider, and RollerGrrl. The three Demonettes acquired their powers at the same time when they stopped The Boyz from robbing an old man’s magic shop. The man – a retired wizard – granted magical powers to the girls’ forms of transportation, giving them all enhanced speed and reflexes, abilities the girls quickly put to good use.