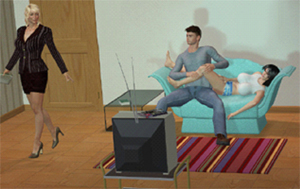 Raquel and Patricia Summers share a simple house on Enid Drive, on the outskirts of the congested city of Metrobay. It is a modest but happy dwelling, given the teacher’s salary that Raquel earns as a chemistry professor at Metrobay University.

Both Raquel and Patricia seem to be loyal television viewers, and their living quarters are arranged around the television systems in their house. Their frequent viewing habits got them into a bit of trouble when they were subconsciously hypnotized by the H.E.R.-TV signal and marched to a secret factory where they were eventually transformed into mindlessly obedient slaves of the renegade android Sentius.

The Summers’ home is often visited by Mick Jones, Patricia’s boyfriend and a rookie officer in the Metrobay Police Department.