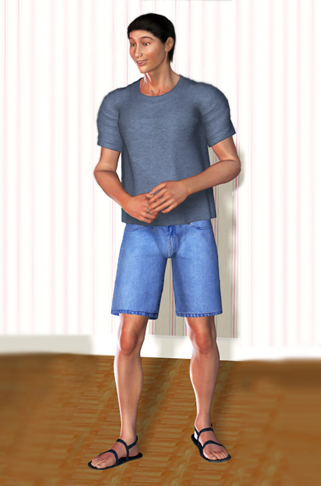 Jeremy Tezuka, or “JT” to his friends, is an APEX Laboratories technician under the employ of Max Indeks. A graduate of Metrobay University, he became close friends with fellow engineering student Mike Roland while both were in college, and they have been virtually inseparable ever since.

JT’s life took a dramatic shift the day an APEX salvage crew recovered a damaged Mechana not far from the ruins of Dr. Twisted’s decimated hideout. Mechana was handed off to JT and Mike to be reprogrammed and repaired, and she was reformatted to serve as a security droid for the labs against the inquisitive eyes and intervention of the Superheroine Squad. At the same time, Mike and JT were tasked with hacking in to the cyborg brain of Marcy Smith, now superheroine Silver Satin. While unable to control her complex neural network, he was able to toy with her mental signals, giving her headaches, blackouts, and mild amnesia, until eventually Marcy sought help from APEX. Rather than aid her, Max took full control over her and used her to resurrect the robot Sentius.

Her task completed, Max tasked JT and Mike with erasing her memory and disposing of her, but the two lecherous men were too overcome with the prospect of controlling and using the attractive superheroine in whatever fiendish ways they could think of. Their mind controlled tryst with Marcy was interrupted by their co-worker Shelley Calvin, who felt guilty over what had been done to her old classmate and deactivated the mind control. Needless to say, Marcy was furious at the pair of guilty scientists and they hastily sent the security droids after her. When those proved ineffective, JT activated Mechana and sent her after Marcy. To his surprised, however, Marcy was able to break his control over Mechana, who returned the favor by knocking JT unconscious and chasing Mike away, allowing them to escape.

With Silver Satin and Mechana gone, a furious Max demanded accountability, but Mike and JT pointed the finger at Shelley. Regardless of whether Max believed their cowardly lies, he decided an example should be made out of Shelley and she was used as a human guinea pig for the radiation reactor, turning her into the sexy mutant Super Freak.

A while later, JT, a closeted fembot aficionado, stumbled upon an online contact using the alias “Mechana”. Assuming it was a coincidence, he proceeded to roleplay with her and “programmed” her to obey him and travel to his apartment, only to discover to his surprise when the amazon android herself showed up at his doorstep, a slave to his every whim. Meanwhile, Marcy Smith has been investigating Mechana’s strange disappearance and tracked her to JT’s place, where she feigned obedience only to catch him off-guard. After freeing Mechana, the two heroines threatened and terrified him, wiping the contents from his computer, and left with a warning to never try anything like that again. If that experience wasn’t traumatic enough, they returned seeking his assistance in tracking down intel on the APEX-created Personality Exchanger, under threat of severe pain.

Tezuka and Roland, along with other scientists like Leela Patel and Fran Hill, were responsible for the design and testing of many top secret APEX inventions such as the greentooth earpieces, virtual visors, and the aforementioned security droids. They were instrumental in the reconstruction of a Robounit conversion chamber inside the central laboratory, and were present when co-workers Hill and Tien Hoang were transformed into drones against their will.

One Halloween night JT and Mikey stumbled back to APEX Labs stone cold drunk, and in an alcohol-fueled lust decided to engage the then-Graybotted Voltara in some sexual mischief. They were caught in the act by a furious Gothikka, and were lucky to escape with their lives when she turned her attention toward rescuing her bride.

JT lives in the same apartment complex as Metrobay Police Officer Mick Jones, with whom he routinely shares video games. He’s also acquainted with Mick’s girlfriend Patricia, whom he views as “annoying”.

Recently JT and Mike were contracted by former APEX colleagues Plastic Pete and Polly Vinyl to deliver an experimental device to Renee Burke, then take possession of and deliver the dollified woman to the villains’ secret hideout.