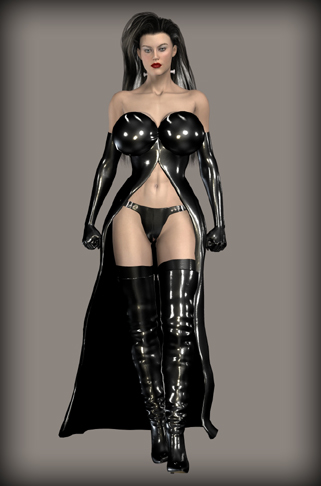 Kikka Brust possesses a dark, complex history that is shrouded in secrecy and intrigue, and she likes it that way. Born in Austria just after the turn of the century, Kikka took advantage of her noble upbringing to attend the finest academies her native country had to offer. A tomboy at heart, Kikka showed a keen interest in military strategy and was one of the first women to join the Austrian army. When Germany annexed her homeland she willingly joined the Reich, but was shunned by her new comrades and told to go home and make babies. This chauvinistic attitude sparked a fierce feminist streak in Kikka, who decided that one day women would become the superior sex.

When the war ended Kikka and her associate Feelix Von Ick traveled to Metrobay with the promise of untold power and wealth if they could recruit a small army to carry out R.O.P.E.’s plans to rule the city. Their plan was working perfectly… until the original Superheroine Squad intervened.

Kikka worked together with Feelix to acquire attractive young girls to experiment upon like guinea pigs in attempts to create an army of obedient female soldiers. The first two victims were two capturedAgents of D.E.S.I.R.E., and they acquired more subjects after hosting a fake beauty pageant, including the likes of future heroine Ms. Metrobay, as well as the rediscovered body of Valiant Woman.

Unfortunately, Kikka’s harsh treatment of Feelix resulted in him giving her an unpleasant surprise by ordered his zombot slaves to restrain and enslave her. She was controlled and then allowed Feelix to extract her genetic material, which was combined with Valiant Woman and Ms. Metrobay and siphoned into the body of another pageant contestant, creating the superheroine Omega Woman, who appeared to retain some of Kikka’s anger management issues.

However, an overlooked Gadget Gal saved the day and freed Kikka and the others from their mental conditioning, but not before locking Kikka in a dungeon cell to keep her from doing any more harm. Feelix was restrained and it appeared they’d be dealt with in the courts… 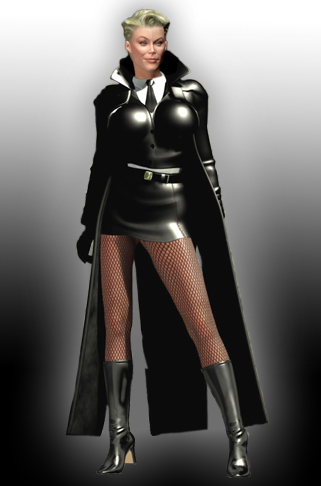 … until Kikka’s parting insults stirred the wrath of Omega Woman, who destroyed valuable lab equipment and an unknowingly caused the prototype radiation reactor to overload and turn Feelix into a massive, brutish monster. Kikka appeared to have met her untimely demise as a result of this freak accident as the inhuman Feelix took out his aggressions on her, but she and Feelix were never found. In truth, her body was cryogenically frozen by a recovered Feelix Von Ick, perhaps out of guilt or some semblance of remorse for his actions, and stored deep inside APEX Industries for many years in the hopes that a cure for her injuries would be discovered.

Decades later, the ambitious scientist Irene Webb was commissioned by the R.O.P.E. executive council to work on a project they felt could swing the tide of their battle against the Superheroine Squad. Irene acquired the preserved body of Kikka Brust and abducted the magician Mesmerella. She used Mesmerella along with her temporary bodyguard Super Freak in an unholy experiment, infusing Mesmerella’smagical essence and Super Freak’s irradiated powers into the comatose body of Kikka.

The resulting experiment successfully brought Kikka back to the land of the living, turning her into the powerful, dark mistress of evil called “Gothikka” and imbuing her with supernatural strength and magical abilities. It appears that time has done nothing to stem Kikka’s crazed ambitions of control and power, for her first act upon her return was to enslave and convert her “savior” Irene into her servant of darkness, Noctrissa. So much for gratitude.

Rejuvenated and stronger than ever, Gothikka looked to oppose the Superheroine Squad and continue her decades-long goal of enslaving the city of Metrobay to her fiendish whims and desires.

Gothikka started her future assault by recruiting more able-bodied slaves wherever she could find them. She quickly found kindred spirits in Spideretta, Sinister Minister, and Twisted Sister, but it wasn’t enough for her. She followed the heroes silently from the shadows and then on Halloween night, a year after her “resurrection”, she made her move.

The first victim was Crissy Tanner, a rookie heroine. Gothikka quickly infected with her Venom and enslaved her, turning her into a loyal minion called “Blackout.” She then transported them both toSuperheroine Squad Headquarters, where she confronted her long-time adversaries Ms. Metrobay and Omega Woman. With Crissy’s power-canceling abilities working in her favor, Gothikka made short work of the veteran heroines and enslaved them and Brown Sugar to her will as Zom-babes.

Using the three buxom heroines as a templates, Gothikka and Frank Einstein created Voltara, designed to be the perfect bride for Gothikka. Satisfied with her new creation, Gothikka went into hibernation along with Voltara, temporarily releasing the Zom-babes from her control with no memory of what had happened to them.

A year later, Gothikka awakened and was enraged to find that Voltara had been stolen (by Max Indeks several weeks previously). Summoning her Zom-babes (and creating a new one in Penny Nichol), she tracked Voltara to APEX Labs, where she discovered Voltara had been turned into a Graybot and was being used by J.T Tezuka and Mike Roland for a night of drunken debauchery, the act which had causedGothikka to awaken. This led to a battle between the Zom-babes and various Graybots until Tezuka and Roland agreed to return Voltara to normal in exchange for their lives. After doing so, and low on magical energy, Gothikka returned to her crypt, again released her Zom-babes, and re-entered hibernation with Voltara.

Gothikka possesses physical strength that approaches the level of Super Freak, as well as a large amount of magical power. She has revealed a talent for magic manipulation and mind control, though it is possible her dark studies have left her with a greater knowledge of magic spells. She has shown that overuse of her powers exhausts her rather quickly, and requires her to enter hibernation for weeks or months at a time in order to ‘recharge’. She also appears to have somewhat of a psychic connection to Voltara, having been abruptly awakened when her bride was imperiled at APEX Labs.

Even without her new abilities, Kikka was proficient in hand-to-hand combat and weaponry, and was a brilliant strategist and a ruthless leader.