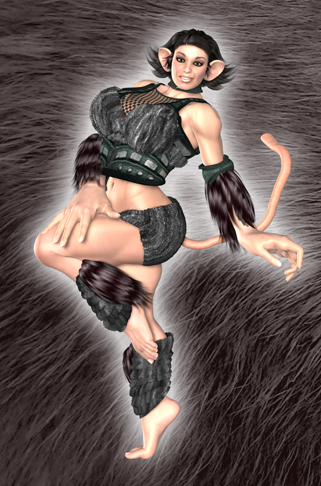 Jaime Porter was a zoologist who journeyed deep into the heart of the Amazon Jungle in pursuit of a rare, ancient race of gorillas that legend claimed were highly more intelligent and advanced than any other primate. However, all she found were the ruins of their culture and a strange labyrinth that led to a single treasure: the great ape stone. Upon touching the stone, Jaime’s body began to change, growing stronger, faster… and noticeably more ape-like. Finding herself endowed with the strength and skills of the great ape, Jaime became queen of the jungle… until she eventually returned home to Liberty Grove.

Unfortunately, the concrete jungle proved far less kind to her. She was branded a freak and an oddity due to her physical transformation and she grew discouraged. That is until she was discovered by Golden Girl heroically using her primate powers to rescue a child from a burning building. She was offered a spot on the League of Liberty and public opinion began to change. She’s now regarded highly as a mainstream heroine… as well as the focus of several peculiar fetish fansites. 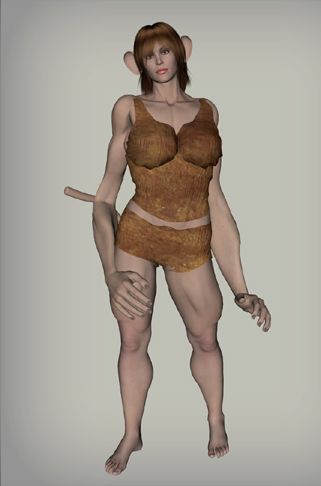 Since then, Gorilla Gal’s had surprising success at her new career, but she remains self-conscious about her appearance. She has formed a strong friendship with She-Bulk, whom also shares some unique physical characteristics, and the two tease each other about it often. She’s had a rocky relationship with fellow heroine Vanishing Girl, however, who views her with some disgust as some sort of animal-human abomination. Unfortunately, despite her gradual acceptance into society again, there are many who view her in the same way, even if they don’t state so publicly, and Jaime often has trouble finding dates, many of whom wonder if a relationship would be considered “beastiality” or not.

Gorilla Gal was one of many heroines captured and turned into a robotic slave by Unity. As “Unity Mu”, it was stated that there was a market somewhere for buyers interested in her particular and peculiar features and abilities. She was saved along with the others when Jupiter Justice teleported them back to Earth.

Gorilla Gal recently underwent a makeover, in part to combat these negative views. However, her ape-like features, ranging from select thick body hair to enlarged hands and feet to a long prehensile tail, are not so easily hid.

Due to her “quirks”, she’s often underestimated by her adversaries, but has routinely surprised villains and fellow heroines with her quick-thinking, agile acrobatics, and unrivaled determination, ensuring neither aliens nor robots nor mutants will ever get the best of her or her friends.