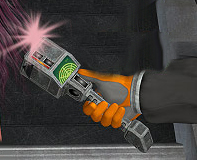 The Remote Control is an APEX-developed handheld control device used to assert immediate and direct control over objects outfitted with an X-band frequency device. The Remote Control sends a direct X-band frequency to the desired object, establishing a strong signal capable of spanning long distances and asserting dominant control over other programs or interfering signals.

The Remote Control has been found to be highly effective at communicating and interfacing with X-band technology, including the Control Helmet and Control Collar.

A basic Remote Control unit was used to create an upgraded control device, the H.E.R. Raygun, which was infused with and powered by a tiny sliver of Thrallium. The upgraded raygun contained a modified frequency signal much stronger than the X-band version, eliminating the need for a Control Helmet and Control Collar altogether. The raygun, although more portable and quicker to take effect, had an overall weaker hold on its victims and its effects did not last as long.