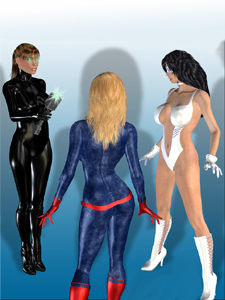 Fearing the worst, the Superheroine Squad sends Valient Grrl and Alpha Woman in for an investigative rescue attempt but are unprepared to face Sentius and his small army. Both are systematically enslaved while Solaria falls victim to the H.E.R.-TV signal, leading her friend Snowflake into Sentius’s factory, where she is seduced and enslaved by newly converted Alpha Woman. Growing desperate, the Superheroine Squad seek the help of a reformed Ted Twiss while Ms. Metrobay calls for some unexpected backup.