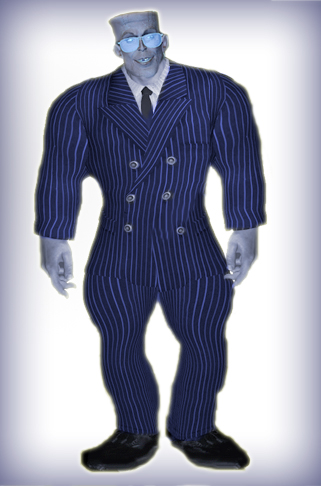 Dr. Franklin Steinbach was an eccentric genius and avid follower of the late Woodrow Strangecraft’s scientific works and experiments. He spent the vast majority of his time in his laboratory, which was located in the basement of his family’s estate. He and his loyal lab assistant Eyegore invested many years toiling away with their mad scientific experiments, and most people in Metrobay saw fit to leave them be.

However, Franklin was soon diagnosed with a terminal illness, for his body was already weakened by a lack of proper food, sleep, or exercise. Unwilling to let his work die with him, he engaged in one last mad experiment using his lab assistant, a golem named Eyegore. He successfully performed the world’s first self-administered brain transplant and managed to merge his brain with the brain of Eyegore, in effect creating a creature with two brains sharing one body.

Naturally, this process was not without its flaws, and the newly created “Frank Einstein” would routinely switch from brutish thug to cultured genius depending on the slightest provocation. The procedure also left the combined creature a misshapen monstrosity that was shunned by the rest of society.

Nevertheless, Frank Einstein found compatriots in the likes of the League of Villains, as well as funding for further research by R.O.P.E. This enabled him to continue his mad science with the same crazed dedication that he had in his old body.

Frank Einstein has been incarcerated multiple times at The Funhouse, but has always managed to free himself, either through his cunning or simply due to his unnatural longevity to live past a life sentence of several decades. He was recently seen under the employ of the evil Queen of Hearts and helped capture the Guardian Gals.

Recently Frank has associated himself with the dark witch Gothikka, who has used her magical powers and R.O.P.E. connections to furnish him with a simple laboratory in the bowels of R.O.P.E. Mansion. Frank was instrumental in the creation of Voltara, utilizing both science and sorcery to bring Gothikka’s buxom bride to life.

Of note, Frank Einstein views superheroine Honeydoll as his arch-nemesis. Viewing himself as the smartest man in Metrobay, his plot was foiled by the heroine when she solved his “impossible” puzzle and foiled his scheme. Frank has developed a begrudging respect for her, addressing her as the “smartest woman in Metrobay”, while remaining jealous and bitter, as well as in denial that anyone could possibly be more intelligent than he is.