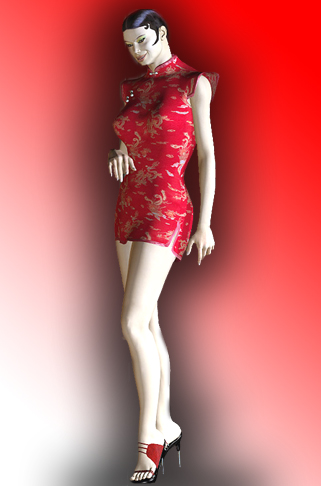 Kinko Mariko is a local crime lord in the underbelly of Metrobay’s Dragon Cove district. A ruthless and conniving leader, Kinko fears no one, not even R.O.P.E. chairman Max Indeks. She has openly defied his restrictions on her criminal enterprises, much to the chagrin of some of her associates.

Snapdragon, as her underlings called her, was rather fond of torturing her prisoners and enjoyed engaging in perverted games of pain and pleasure with her captives. She ran an underground slave market in addition to her many other criminal activities and always kept the best of the selected stock for herself.

Snapdragon later formed an alliance with another crime lord, Vermin, in an attempt to bolster her influence and strengthen her own hand. It was a gamble that seemed to pay off.

Max Indeks, however, successfully managed to take Vermin’s place as leader of the Vermin Clan and used Kinko as an unwitting accomplice in discovering and outing traitorous R.O.P.E. members. When the Vermin Clan was dissolved, Kinko was left out in the open and found herself without a cushion to land on. Her criminal empire collapsed and she was locked behind bars at The Funhouse, where she is currently serving a very, very long sentence.

She has been shown to have been a memer of R.O.P.E. herself, either in the past or currently, and was a spectator and participant in many of Max’s games involving his nemesis Pink Pussycat.