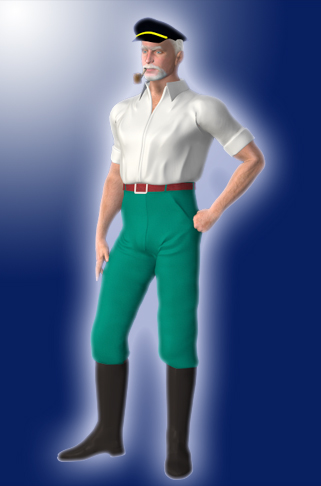 The Admiral of Point Authority, Murphy “The Skipper” Hemingville is a legendary old sea dog that has manned his ship, the USS Valaya, for the better part of a half-century. He has frequented Metrobay Harbor for decades and routinely brings with him another miraculous tale of daring adventure.

A man of irrefutable loyalty, courage, and virtue, The Skipper is nevertheless a man with an almost legendary background and has regaled any audience willing to listen to his sea stories with tales of wonder, horror, romance, and excitement. A globe-trotting adventurer, he has been to almost every corner of the world and back again, having crossed paths with everything from pirates to super spies to monstrous creatures to veritable gods and goddess, and yet has always managed to live to tell the tale.

Because of his wide-spread experiences and adventures, he has often been a vital source of information and Intel for the Superheroine Squad concerning other parts of the world. He has contacts all over the world, including stations located in Legion of Superheroines and Liberty Grove territory, and often serves as a liaison between superhero organizations.

Despite his age, he maintains the physique and endurance of a man in his prime and is more than willing to engage in physical confrontation either to test his mettle or to settle a dispute. A romantic since he first set off for high adventure on a dinky little skiff, he has charmed dozens of women across oceans and decades but his free-spirited nature has prevented him from ever settling down. He often references his two true loves, the vast open sea and the woman who made it all possible, whoever that might be.

He was recently attacked by the Heatthrob gang while meeting with the heroine Gallant Lass, dressed up as the villain Vermin, and framed for an attack on his friend Mayor Turner. He was later cleared of all wrong-doing once the Guardian Girls exposed the true culprits behind the attack.