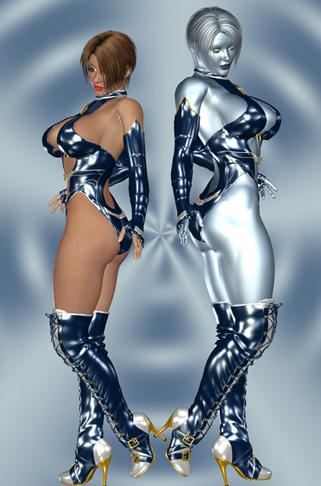 Christine grew up in the French town of Montbeliard and by all accounts led a fairly unremarkable early life. The only scandal that crossed Christine’s path was when she was accused of having a secret lesbian affair with the daughter of the town’s mayor. She was cleared of this accusation but there were more than a few Montbeliard residents who believed otherwise and thought Christine was a bad seed in the town.

Shortly thereafter, Christine found herself in the path of a Fiat hurtling towards her with such speed that it seemed certain she would be run over and killed. Perhaps in reaction to the surge of adrenaline flowing through her, Christine suddenly grew in height and her entire body took on an armored appearance. In this new “look”, Christine easily withstood the impact of the car hitting her, to the amazement of the shocked bystanders around her.

Emboldened by the newfound power, Christine decided to fight crime as a heroine named Armure, which quickly became a name feared among the criminal underworld of France. She joined Scotland Yard in her civilian life and met Camile Woodspeak, who she learned was a crimefighter Decibel. Finding a mutual like for detective work, the two soon became inseparable and their fellow detectives admired how they managed to crack cases that were previously believed unsolvable.

Alerted to a rampant crime wave befouling the North American city of Metrobay, Armure and Decibel journeyed to the city to aid in quelling the uprising, as well as discover the mastermind behind the activity. Before finding the truth, though, the two were ambushed by mind controlled agents working under the direction of Feelix Von Ick. Armure and Decibel were rendered unconscious and taken to Feelix’s secret island base. The story is ongoing.