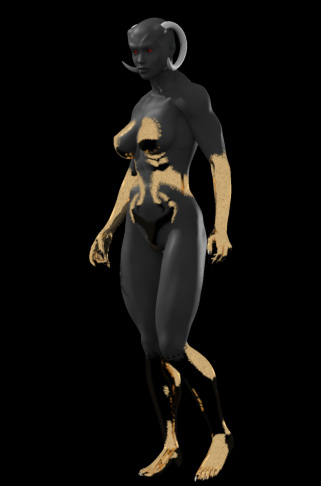 Shadowlight is a woman whose past is a mystery to herself, and she doesn’t know if she even existed prior to four years ago.

What she remembers is following the death of her acrobat parents when she was a teenager, Ricki Grausohn became the ward, and when she came of age the lover, of Stephen Smith, secretly the renowned hero Mighty Justice. Operating as his sidekick, the heroine Flag Lass, the two protected the city of Laythoff Haven until four years ago when Flag Lass was the victim of a brainwashing attempt by a mad scientist. 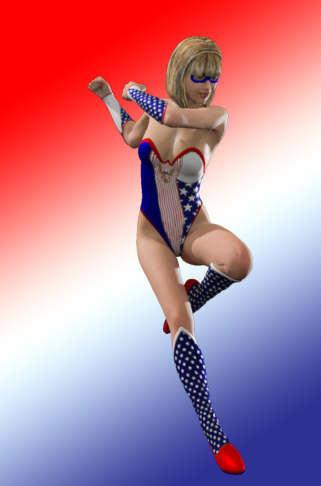 Although rescued, something had changed and Ricki began noticing that things seemed wrong with the city. Eventually she discovered that somehow Stephen, when he dreamed, was altering the very nature of reality and when he woke up, he–and everyone else–was completely unaware of any changes. Only Ricki had somehow become immune and could remember what things had been like before each change. She suffered a near-breakdown when she realized that she herself would be unaware of any changes that had taken place before the attempted brainwashing, and so she couldn’t be sure that anything she knew was real.

After fruitlessly attempting to warn people what was happening (which was doomed to failure since, as far as they were concerned, things had always been the way they were at the moment), Flag Lass began actively fighting Mighty Justice. One day, after one of his dreams, she found herself changed into a succubus, believed by the people of Laythoff Haven as a villainess and the long-time archenemy of Mighty Justice. She realized that Stephen’s unconsciousness was being driven by his libido, explaining why his archenemy was a supernatural seductress and why the city was becoming almost entirely populated by attractive women, all of whom were willing to throw themselves at their beloved hero.

Now known as Shadowlight, for several years she fought Mighty Justice, trying to find a way to put an end to the changes he was causing and which she realized was spreading. She eventually became aware of an experimental device created by APEX Labs which was meant to allow someone to enter the dreams of another for psychiatric treatment, and realized that if she could get Stephen into the machine, she might be able to control his dreaming and set the world right again.

Hiring renowned thief Akiko “The Panther” Nagata to steal the device, her plan seemed ruined when Nagata was herself changed by a dream and captured by the police and Mighty Justice before payment could be made and the device exchanged. Ironically, it was the arrival of four heroines from Metrobay—Valiant Woman, Green Guardian, Goldwing and Memetique–that allowed her to retrieve the device and capture Mighty Justice, although not before the four had also been turned into her succubi slaves.

Entering Mighty Justice’s dream, Shadowlight discovered that Stephen Smith was only a hollow shell of a soul, manipulated by the god Ikelos who was attempting to change the entire world into a dream in which he would rule supreme and attempt to take control of the realm of Olympus. She also discovered that her resistance to Stephen’s power was due to the goddess Athena, who used her as a doorway to enter the dreamworld and defeat Ikelos. 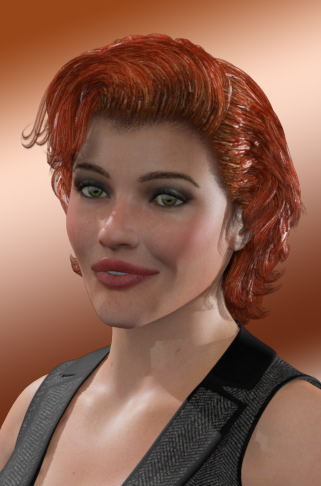 Before Athena took the broken soul of Stephen away, she gave Shadowlight the opportunity to use one final dream to change the world as she would like. Deciding it was not her place to make decisions on how to alter the lives of the innocent victims of the city, Shadowlight returned the four Metrobay heroines to normal (although some residue of their changes would linger) and left Laythoff Haven as it was, her only alterations making the people believe their hero had died heroically defending the city, forgetting the existence of Shadowlight, and creating a new identity for herself as Cameron Smith, the “cousin” of Stephen Smith who inherited the family fortune.

Shadowlight had since made her “debut” as a mysterious figure protecting Laythoff Haven and the surrounding area following the death of Mighty Justice.

Shadowlight has superhuman strength, speed, resistance to injury, and can fly. She can fire concussive blasts of dark energy capable, at full strength, of punching through reinforced concrete walls. She can see in total darkness and, given that she was changed into what Smith believed a demon would be, is highly resistant to fire and high heat. While in shadows she can make herself invisible.

As a succubus, she must feed on sexual energy, and to do so has the ability to raise someone’s libido to uncontrollable levels. While they are in a sexual haze, they will obey instructions she gives them without question. Shadowlight does not have to be personally involved in the sex acts to feed off them, but doing so makes her meal “tastier”.

As a result of Athena’s actions, Shadowlight is immune to non-magical forms of mind control, and resistant to magical forms at levels below that of a demigod or extremely powerful supreme magic user, although she could theoretically be physically controlled.