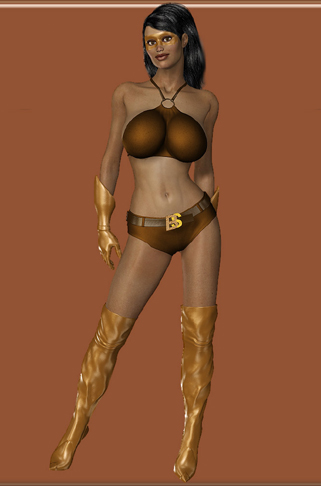 Brown Sugar was raised by a single father who was in the military and constantly on the move. She was estranged from her mother, Pamela, for reasons she never fully understood as a child, unaware her mother was secretly the legendary heroine Hot Cocoa. Her mother’s disappearance when she was 16 haunted her for decades afterwards.

After finishing high school, Georgia followed in her father’s footsteps and enlisted in the Army, becoming the most decorated woman in her unit’s history. Her talent and resourcefulness got the attention of Colonel Ulysses Longcannon, who enlisted her in the elite squad of female special forces codenamed the Foxy Commandos. She traveled the world honing her skills to the point where she became one of the finest spies ever to serve her country. 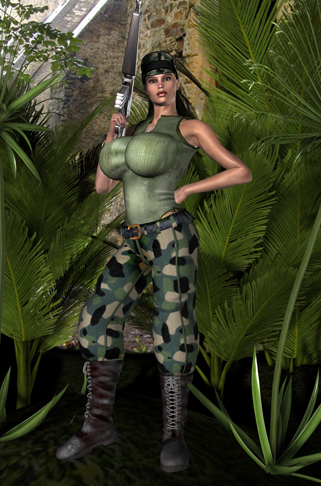 After proudly serving her country, Georgia retired to civilian life. But it wasn’t long before she got the itch once more, so she joined the Metrobay Police Department as a way to give back to her adopted hometown. After one look at her résumé Chief Patrick Coleman knew that he had someone special on his hands, and referred Georgia to Ms. Metrobay and Alpha Woman as a prime candidate for membership in the Superheroine Squad.

The newly-christened “Brown Sugar” was given one of her first assignments: infiltrate APEX Labs and see what connection the corporation may have to the recent spate of disappearances around town.

Her progress into the investigation was short-lived, and during her undercover mission she was discovered, captured, and enslaved by Dr. Twisted and Sentius and turned into Sugarbot, Twisted’s obedient slave. She was also the first known test subject for the streamlined Control Collar. This lasted until the conclusion of the events of Twisted Tales upon which she was freed by her remaining teammates. Dr. Twisted used her position as an insider at APEX to obtain and steal valuable information and technology he believed would assist him in his devious designs. The Control Collar, coupled with Brown Sugar’s highly developed infiltration skills, made her an ideal mole inside the company. 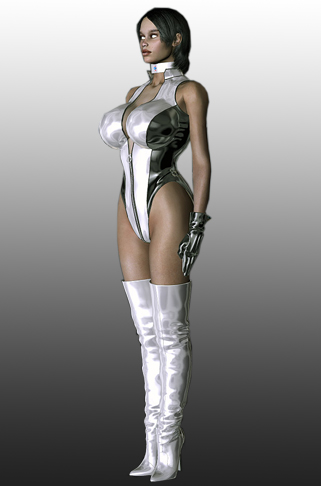 Despite this, it was the capture of Brown Sugar that alerted Belinda Giolla to Dr. Twisted’s schemes, inadvertently setting in motion the events that lead to the final confrontations between Dr. Twisted, Belinda, Sentius, and the Superheroine Squad. Afterward, she became the mentor heroine to the newly recruited Silver Satin and taught the young rookie and other young recruits a variety of hand-to-hand combat maneuvers as the Squad’s resident self-defense expert.

Brown Sugar’s luck hasn’t improved much since then, as she was one of the first heroines captured and converted by Sentius during his attempted mass enslavement of Metrobay during the events of Superheroine Squad. She was freed from her enslavement after Sentius was ultimately destroyed.

After this, she was duped into wearing a greentooth earpiece by the normally kind and benevolent Gilbert Petto and mind controlled into serving as a template to create an android doll in her image, which he christened “MONA”. However, rather than remaining with the good doctor, she received instructions in her earpiece and was ordered to depart, joining the Dairy King as a mind controlled lactating human cow, thoughtlessly contributing her exquisite, Thrallium-enhanced breast milk for him until a machine malfunction liberated her from his control.

Later, Ms. Metrobay tasked Brown Sugar with investigating the newly opened “Headlights” restaurant, which had been stripped from Kelly’s control and placed firmly in ROPE’s business hands with playboy Vic Reno taking over the venture. Going undercover as Mrs. Ippi Cocoa, Georgia discovered Vic had been enslaving women to serve as free labor and provide services to his customers. Penny Nichol caught the snooping heroine off-guard and Georgia was outfitted with a greentooth earpiece, controlling her thoughts and actions. Vic Reno promptly tested her obedience, dressed her up as a Headlights Hottie, and put her to work serving customers. 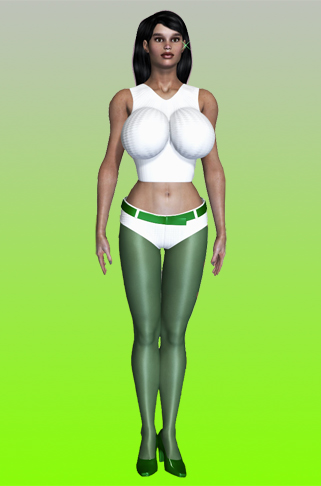 After being “hired” at Headlights, Brown Sugar’s greentooth earpiece was borrowed by Omega Woman. Despite being broken from her direct link to Vic, she nevertheless discouraged action against him. She later revealed a subtle addiction to the greentooth and angrily confronted a confused Omega Woman about borrowing the device, promptly reattaching it and re-enslaving herself. Under Vic’s bidding, she “recruited” more gorgeous women to join her at work, including Patricia Summers. She was ultimately freed after a liberated Penny and the mysterious Bridgett disabled her greentooth device.

Brown Sugar’s storied history remains mostly only hinted at. It has been revealed that she has a shared past with the Chinese heroine Jade Lightning, notably during her stint in the Army. Both studied martial arts and self-defense in Japan under the same sensei, Sakura Hyuga, otherwise known as the League of Liberty heroine Duality Dame, and have remained close friends for the better part of a decade.

Brown Sugar’s complicated life has only grown more so with the reappearance of her former Foxy Commando teammate Amelia Applegate as the armored crimefighter Afterburn, who remains under the control of their ex-commander, General Longcannon.

But the real shake-up in her life has been the reappearance of her long-missing mother, the former crimefighter Hot Cocoa, who has emerged as a brainwashed minion of the APEX Alliance – Max Indeks’s personal team of superheroine slaves. To date, Georgia has been unable to reawaken her mother’s memories or feelings for her or overcome her brainwashing. 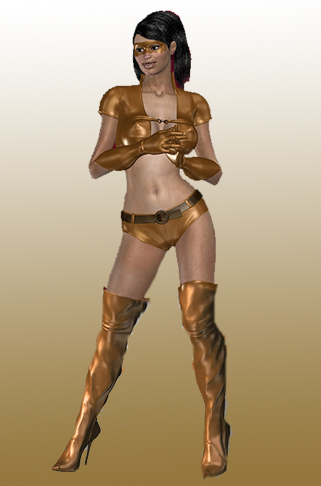 It’s been revealed that Brown Sugar talks in her sleep and apparently harbored romantic feelings towards her former military commander, which may be a result of residual programming the Foxy Commandos received between missions.

As her civilian identity of “Georgia Brown” she continues to keep tabs on APEX’s dealings. She is generally the first heroine called when an infiltration mission is in order and has proven her worth time and again.

Brown Sugar is one of only a select few Superheroine Squad members not to possess any known superpowers, a privilege bestowed upon only the most ardent and skilled of non-powered individuals. But her espionage, infiltration, and reconnaissance skills are second to none, and she is also the most highly skilled and trained martial arts instructor they possess. As a result, new inductees are often taught basic self-defense under Ms. Brown’s tutelage. she is also skilled in various forms of armed combat and has been shown proficient with tonfas, escrima sticks, and firearms.