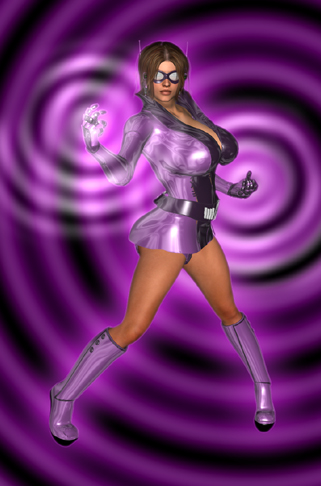 Brooke Cameron is a student at Metrobay University and a driven scholar. A bright and talented young woman, she managed to move into advanced math and chemistry courses with minimal effort, but found herself discouraged at the number of super-intelligent geniuses that were attracted to Metrobay, giving her a bit of an inferiority complex and an attitude.

Still, she was a pleasant enough girl. Social, fun-loving, and eager to learn, she had both beauty and brains to spare. She had a knack for building things to help her out in her daily activities, and eventually put her mind towards developing an automatic language translator, mainly so she could skip the basic foreign language class she was forced to take.

However, while she had always intended to use her gifts and inventions for good, this began her seduction to the dark side of genius. When demonstrating the device to her foreign language teacher, Fabiola Mendes, it had the unfortunate side effect of negating her mind and translating anything said into a foreign language, and then translating it into a command that simply could not be disobeyed.

Having always nursed a powerful crush on her hot instructor, Brooke gave in to the temptation and used her invention, the mind-filter, to take advantage of the situation. Rather than feeling guilt, she felt elation and a sense of purpose.

Reformatting the mind-filter and fashioning herself a costumed identity, Brooke became “Subliminal”, a reckless pleasure-seeker with no allegiance to anyone but herself. With mischief and carnal desires running wantonly through her mind, she views the entire city of Metrobay as an all-you-can-eat-buffet just waiting for her to sample as much as she can.