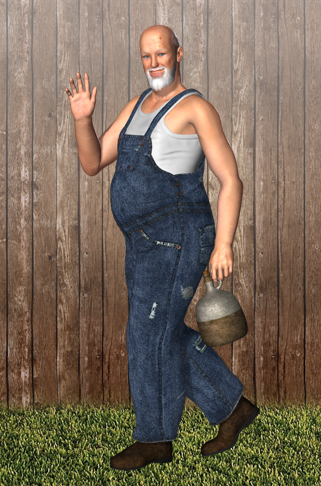 Real Name: Duke West Alias: “Pa” West Age: Old enough to know better Height: 5’5″ (elderly), 6’11” (empowered) Hair: White (elderly), Brown (empowered) Occupation: Farmer Affiliation: West family Abilities: Enhanced size, strength, and longevityIt can be tough enough as the only male in a family full of breathtakingly beautiful women, who are always the object of every suitor and gentleman caller for miles around. But when you are Duke West, husband of the mythical Calico Kitty and father of the legendary Ms. Metrobay, “tough” might as well be your middle name!

Duke is a Hooter County good ol’ boy through and through. He was born there, he has lived there his entire life, and he’ll die there – eventually. You see, the West clan carries with them a family trait that is part blessing and part curse – they don’t seem to age. At least not as quickly as everyone else. Duke has been living on his ancestral farmstead for well over a century, and he is still way behind the lifespan of his younger-looking wife Karen. That’s because the West property sits over a small underground lake of radioactive liquid Irridite, which combined with their latent superhuman genetics keeps them relatively young and fit at an age where most people would be pushing up daisies. However, Irridite doesn’t completely explain Pa’s longevity like the rest of his family. He owes his vigor at least in part to his secret “White Lightnin'” moonshine, which when ingested in an hour of need transforms him into a hulking specimen of a man capable of great feats of power and athleticism. Otherwise Pa chooses to live a simple life, looking after his farm and his family and daring any no-good crooks to try to cause a ruckus in his beloved hometown. Notable Appearances: “The Chrome Virus”, “Voodoo County”, “Frankenbride”