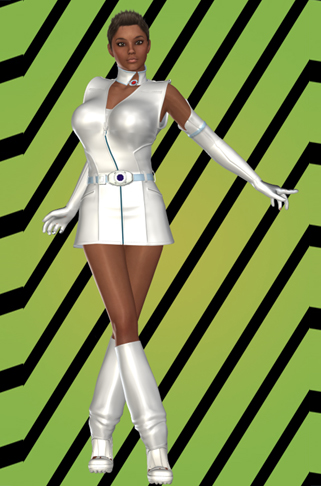 Machine Matriarch created many synthetic, artificial people during an attempt to create replacements for many heroines during her planned takeover of the planet, to usher in an age of robot superiority and conquest.

To weaken the Superheroine Squad’s efforts to stop her, Matriarch attempted to create duplicates of various heroines to serve as sleeper agents to destroy them from within.

Using augmented blueprints from Gilbert Petto, Machine Matriarch lured the heroine Honeydoll into a trap and captured her, using her as the template for various robot copies she populated her artificial testing ground with.

Galatea would have been just another nameless drone had her sister drone, Auto, not evolved faster than their “mother” ever anticipated. Auto’s sentience and disgust at their creator’s plans caused her to rebel. She captured the HD-0131 unit and, using her hacking abilities, liberated the drone and shared her self-awareness with the fledgling drone, who shared her sister’s apprehension at Matriarch’s plans.

Together, the two drones rebelled and saved the captive heroines and foiled Machine Matriarch’s plans. Since part of her being was copied from Honeydoll, in the hopes of replacing her, Galatea felt a powerful connection to her originator, who took pity on the young android and grew to accept her as a surrogate sister. She adopted her new civilian identity and has longed for nothing more than to be accepted as human as any other heroine.

Despite this, she often stays out of combat to assist with the other androids and she can’t deny her connection to them as well. Of all the androids in Squad HQ, she is by far the most spirited and “human”, largely due to her obsession to behave and think more like a human being, even if such attempts are seen by her android peers as detrimental or outdated to their superior calculated minds and efficiency.